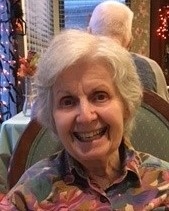 Artemis S. Paras, 91, of Manchester died on Thursday, September 22, 2022 at the Catholic Medical Center, in Manchester, NH. She was born in Manchester, NH on June 11, 1931, the daughter of the late Anastasios George and Xanthippe (Kitsi) Spanos.

She was the devoted wife of S. Basil Paras and ever-present mother to sons, Stephen Basil and Philip George Paras.

Artemis was raised and schooled in Manchester. Her early childhood years were spent living in “the fields” section of Manchester. She was a graduate of the Maynard School and Manchester Central High School. While she was enrolled in public school, she attended afternoon Greek school for six years at the Greek Church, earning a diploma in Greek studies. At Central High School, Artemis served as President of the French Club and participated in student government, the Glee Club, the Chorus, and the Orchestra as a pianist. She remained an avid piano player throughout her life.

Following her graduation from Central High School, she pursued higher education at Bates College, earning a Bachelor of Arts degree in 1953. While at Bates, she was inducted into the Phi Sigma Iota Society. Upon graduation from Bates, she enrolled in the summer French school graduate curriculum at Middlebury College.

Between 1953-1954, Artemis was employed by the Andover, MA Central School District where she taught conversational French to elementary students using the direct method of learning.  During her second year of teaching, she met S. Basil (Bill) Paras. They were engaged Christmas 1954 and were married April 24, 1955. Their first home was in Evanston, IL, residing there until August 1956. While in Evanston, she was employed by the Berlitz School of Languages where she taught English to the school’s enrollees using the direct method. When Eastman Kodak Company transferred her husband to its headquarters in Rochester, NY, Artemis and Bill relocated to Penfield, NY where they settled and raised their sons. Upon Bill’s retirement from Kodak in 1991, Artemis and Bill returned to New Hampshire, establishing residency in Manchester.

During the family’s residency in Penfield, NY, Artemis served as a member of the American Association of University Women and the Penfield Friday Club. She also taught vocabulary enrichment in an adult education program and coached test taking techniques to high school and preparatory school students in order to improve their verbal SAT scores.  She was also a member of the Greek Orthodox Church of the Annunciation in Rochester, NY where she taught church history and liturgics.

Upon her return to Manchester, she was heavily engaged in civic matters related to environmental and land use rules and regulations, and health care legislation. She often testified before governmental boards concerning proposed legislation and public issues affecting citizens of the state. She also participated in government-sponsored focus groups involving health care and the environment.

She was a linguist, fluent in Greek, French, Vlachian, and English.

The family wishes to express their sincere appreciation and gratitude to the staff at Bel-Air Nursing Home and Rehab Center for the excellent care that was provided to Artemis during her stay.

Survivors include her two sons, Philip George Paras of New Hartford, New York and Stephen Basil Paras and his wife Shinko Hanaoka of New York City; nieces; nephews; and cousins. She was predeceased by her husband of 61 years,

It has been suggested that those who wish may make memorial donations to Greater Manchester Hellenic Scholarship Fund, c/o St. George Greek Orthodox Cathedral, 650 Hanover Street, Manchester, NH  03104-5306, in memory of Artemis.

To order memorial trees or send flowers to the family in memory of Artemis S. Paras, please visit our flower store.