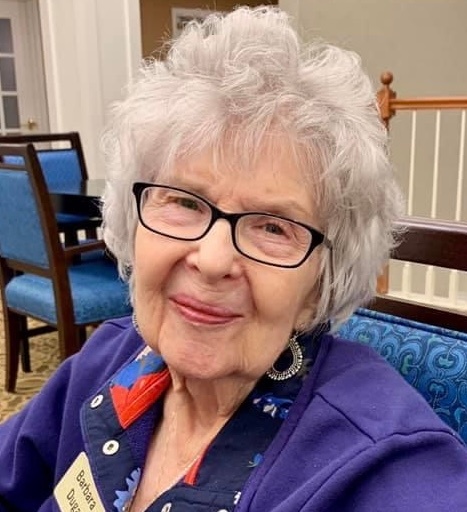 Barbara Louise Dugan of Manchester passed away peacefully August 13th at Community Hospice House in Merrimack after a brief period of declining health. She was 94.

She was born March 13, 1928, in Lansing, MI, the daughter of the late Edward Hintz and Paula Postler. She graduated from Western Michigan University in Kalamazoo MI in 1950 with a Bachelor of Science in Occupational Therapy. Her unique training as an OT at this time included working with polio patients in iron lung machines, aiding those with tuberculosis, and supporting amputees from World War II.

One day, while casually attending a church social, Barbara caught the eye of a wavy-haired gentleman named Ed who had a quick wit and infectious smile. Though she was in the company of another suitor at the time, his ability to make her laugh was a game-changer that day. A whirlwind romance led to the steps of the log chapel at the University of Notre Dame, spring boarding a marriage and love story that would span 62 years.

Barbara was known for her devotion to her family, her quiet grace and faith, and her uncanny ability to never throw anything away. This included old notepads of various sizes, remnants of school supplies after her children were long gone, repurposed giftwrap, and Good Housekeeping magazines and mail order catalogs dating back to the early 80’s. When her grown daughters would periodically stumble upon these treasures and graciously offer to help her declutter, she would get a certain look in her eye that led them to immediately cease and desist. Because, let’s face it, you just never know when old appliance manuals for items you no longer have might come in handy one day.

She was an incredibly kindhearted and grateful person, beloved by anyone who was lucky to make her acquaintance. Friends and strangers alike always remarked on her gentleness, her sweet nature, and her ability to make everyone feel like they were valued.

She was predeceased by her husband of 62 years, Louis “Ed” Dugan in 2012, and her daughter Caroline Dugan Gerlach in 2015.

Visiting hours will be held on Thursday, August 18th from 5-7pm at The Phaneuf Funeral Home & Crematorium, 243 Hanover Street in Manchester. A funeral service will be held on Friday, August 19th at 10am at St. Elizabeth Seton Church, 190 Meetinghouse Road in Bedford. Interment in St. Joseph Cemetery, Bedford.

Her family would like to thank the staff and community of RiverWoods Manchester for their support and loving care over the years.

Memorial Contributions in her name can be made to The Community Hospice House in Merrimack.

To order memorial trees or send flowers to the family in memory of Barbara L. Dugan, please visit our flower store.