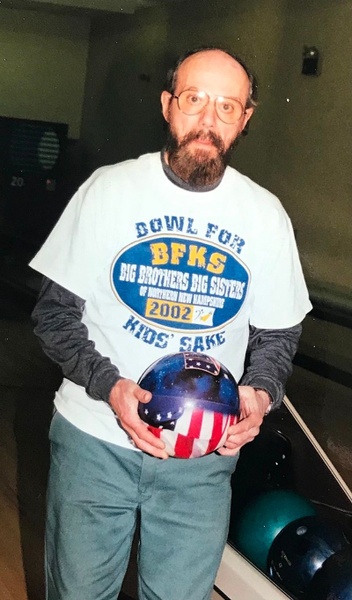 WESTMORELAND, NH -- Boyd Malcolm Aldrich passed away peacefully on April 29, 2021. After fighting Parkinson's Disease for 23 years, Boyd decided to go on his terms. He died of pneumonia shortly after turning 72 in April, which is Parkinson's Awareness Month. He was born on April 25, 1949 in Littleton, NH to Elaine and Glenwood Aldrich of Lisbon, NH who predeceased him.

Boyd graduated from Lisbon high school in 1967 and Plymouth State College in 1972. He had three children, Matthew, Andrea, and Laura, with his former wife Nancy. He remained close with many high school and college classmates throughout his life. Described by friends as "the life of the party," Boyd had many fun, and some not so legal, stories to tell.

Boyd worked at Shop 'n Save (Hannaford) in Plymouth, NH for 30 years as an assistant store manager, grocery manager, and frozen food manager; he was named associate of the month several times. He would take Matthew and Andrea to the store to help stock shelves. He could make any task fun! He was also known to many in the community as "Mr. Ice Cream Man."

A highlight of Boyd's career was winning a trip to Fenway Park in a limo for creating the best store display for a new flavor of Edy's ice cream. A lifelong Red Sox fan, Boyd created a Red Sox display, complete with the song "Take Me Out to the Ball Game." Boyd and Laura took day trips to Red Sox and Patriots games, Mohegan Sun, and to York, Maine, his favorite vacation spot.

Boyd believed in living life to the fullest and enjoyed skiing, bowling, and community involvement. He taught his children to ski and was a volunteer ski chaperone. Always the daredevil, Boyd skied Tuckerman Ravine on Mt. Washington. Twice he was the top fundraiser in the Bowl for Kids' Sake charity event, and he designed and sold "Strike Out Parkinson's" t-shirts to raise nearly $1,000 for the Michael J. Fox Foundation for Parkinson's Research.

Boyd lived the past 11 years at Maplewood Nursing home in Westmoreland, NH. One of the longest residents, Boyd was well known by staff on every floor and department, for better or for worse! The staff learned quickly to ask, "where's Boyd?!" He could be found playing cribbage or bingo, attending musical events, or at happy hour in his "dancing shoes." Most often he took laps around the floor, telling jokes, or showing off a new hat, decorations for his walker, or pictures of his family. Boyd loved being outside and planting flowers each spring. Boyd's family is forever grateful to the Maplewood staff for caring for Boyd, understanding him, and facilitating his participation in activities, trips, and fundraisers to create lasting memories.

Boyd was diagnosed with Parkinson's Disease at age 49. Forever tenacious, he was committed to maintaining his independence and was always on the move, literally and figuratively, to try new treatments for the disease. Boyd would have wanted to continue the fight. To honor his dedication to finding a cure, his family arranged the donation of his brain to the Mayo Clinic, a prestigious research institution responsible for many breakthroughs on Parkinson's Disease.

He is survived by his brother Paul Aldrich (wife Joanna) of Campton, NH, nieces Sara Eastman (husband Don, deceased) of Franklin, NH and Molly Aldrich of Milton, NH, son Matthew Aldrich (partner Maryann Shastop) of Concord, NH, daughter Andrea Bowne (husband DJ) of Canton, CT, and three grandchildren, Alex, Jackson, and Ethan Bowne, and daughter Laura Aldrich of Washington, D.C. Boyd was also a beloved cousin and nephew to many relatives both near and far and a favorite funny friend to countless as evidenced by the dozens of cards he received each Christmas and for his birthday that he read with joy and proudly displayed in his room.

Boyd will be buried in Sugar Hill, NH on June 18, 2021 at 11:00 at Sunny Side Cemetery. Those in attendance are respectfully requested to wear a mask and practice social distancing. In lieu of flowers, donations can be made to the Michael J. Fox Foundation for Parkinson's Research in memory of Boyd Aldrich. Please click HERE to share your memories of Boyd with his family.

Links:https://www.michaeljfox.org/donate https://docs.google.com/forms/d/e/1FAIpQLSdqYx0YpC7QrgeufNW4BSzPrcHvS39JKtWOMmmLpk9xAB0QUA/viewform
To order memorial trees or send flowers to the family in memory of Boyd Malcolm Aldrich, please visit our flower store.