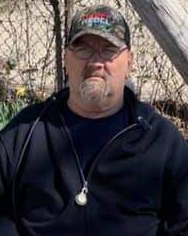 Bruce Earl Raymond, 65, of Manchester, NH passed away peacefully on January 20, 2023 at CMC after a battle with kidney and heart failure. He was born on November 15, 1957 in Haverhill, MA to the late Barbara S. (Rossetti) Raymond and Earl Raymond.

Growing up in Haverhill, MA, Bruce was always near his family who he loved dearly. He was a carpenter and painter by trade, and would go on to start his own roofing company, Raymond’s Roofing, which he owned and operated for over 15 years. Bruce was always passionate about his work, having loved spending time outside and working with his hands alongside his son Jason.

Those who had the privilege of knowing Bruce will remember a loyal, generous and loving father, grandfather and friend to many. Bruce was passionate about his Harleys motorcycles and was always happiest when out on the road. During his last years of life, Bruce found his faith in God, and was able to find peace and comfort in his faith, especially through his illness. Above all else, Bruce loved his family immensely, and will be dearly missed by all whose lives he touched.

A Memorial Service for Bruce will be held on Thursday, February 2nd from 5 PM to 6 PM at Phaneuf Funeral Homes, 243 Hanover St. Manchester, NH.

Donations in Bruce’s memory can be made to Alcoholics Anonymous.

To order memorial trees or send flowers to the family in memory of Bruce E. Raymond, please visit our flower store.