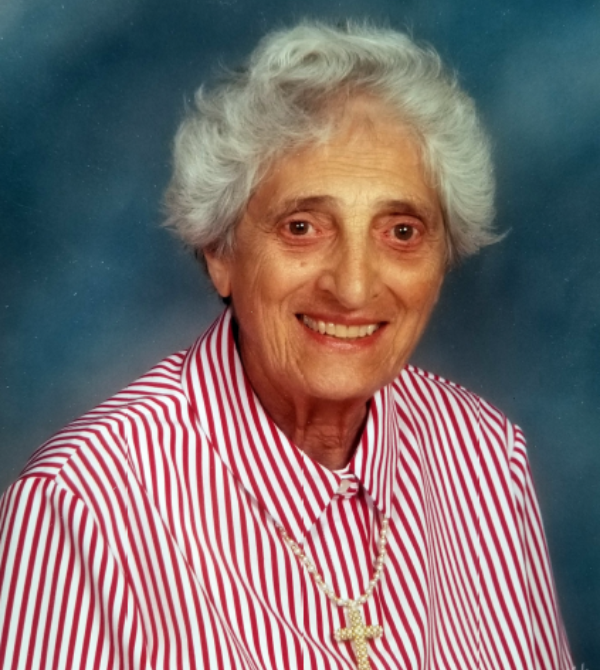 “Nothing reopens the spring of love as fully as absence, and no absence so thoroughly as that which must needs be endless” Trollope

Camilla Jean Palladino, 102 passed peacefully into her new life on December 3, 2021. How, in a few paragraphs, does one illuminate the life of a person who lived a century of change, from the end of the “Great War”, the emergence of America as a world power in the twenties, the Great Depression, the second World War and the prosperity that followed, and the dramatic technological and social changes our nation has endured throughout that time? TO know what she has observed and experienced in her lifetime is to make a journey through the history of the last forty percent of our nation’s existence.

To have known her, as a family member, a friend and neighbor, is to have had the sense of a good and loving person, someone of spirit and ambition, of caring and kindness, and with a zest for enjoying life. She and her sister were orphaned in their early teens and lived with their maternal grandmother in Uniontown, Pennsylvania. She graduated from Uniontown High School where she trained in secretarial and business programs. At the end of the thirties, she moved to Stamford, Connecticut to live with her sister and worked in a factory engaged in specialty war projects. Later she worked in the payroll department of the Schick Shaver Company, which she followed to Lancaster, Pennsylvania to set up their new plant’s payroll department. She returned to Stamford and supervised a publishing house in the accounting department. She later moved to Florida to be near her retired sister in 1977, and there worked in a bank’s mortgage department for several years, from which she retired in 1986.

During her work career she enjoyed travel, visiting throughout Europe and North America. After her retirement she was active in the Girl Scouts of America as a leader and trainer, and volunteered with the American Cancer Society of South Florida. She also worked with disabled children in her church’s religious education program, and wrote a weekly column for a Sarasota daily newspaper ion the port Charlotte area. In 1998 she fulfilled a life-long ambition of earning a baccalaureate in liberal studies at Florida Southern College at the age of 79.

Camilla moved to Littleton, New Hampshire to be near her nephew and his wife in 2005, and stayed involved in her church activities at St. Rose of Lima. She eventually located to the Grafton County Nursing Home where she resided the last four years of her life, having lived independently until that time. She is survived by her nephew and his wife, Charles and Jane Micciche of Franconia, NH and her grand-nephew Marc Micciche of Littleton.

A private graveside ceremony will be held at the Elmwood Cemetery in Franconia, where she will rest next to her beloved sister, Louise. In lieu of flowers, donations may be made in her memory to the Grafton County Nursing Home in North Haverhill, New Hampshire. She will always be remembered, missed and loved.

To order memorial trees or send flowers to the family in memory of Camilla J. Palladino, please visit our flower store.
Send a Sympathy Card