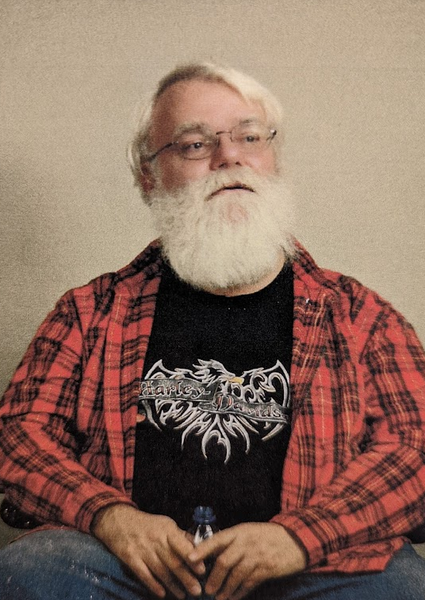 Christopher “Kit” Mason von Sück, 69, passed away at his home in Manchester surrounded by his loving family on Tuesday, April 19, 2022. He was born on September 29, 1952 in Ipswich, MA, son of the late Howard von Sück and Marjorie Wood. He shared nearly 48 years of marriage with his wife, Carol (Pinard) von Sück.

Kit was raised in Ipswich and was a graduate of Ipswich High School, Class of 1970. He went on to graduate from Keene State College, Class of 1974. He worked for decades in the technology sector at companies that included Digital Equipment Corp, Compuware, 3DV, and others.

Kit enjoyed working with his hands and making things; he owned his own screenprinting and photography business, was a leather worker, carpenter and locksmith. He took pride in sharing his skills with students, teaching shop at Timberlane Regional High School. He loved volunteering, including building houses with Habitat for Humanity, volunteering at the Museum of Printing in Haverhill, MA, and serving as a board member of First Congregational Church. He was a member of the International Brotherhood of Real Bearded Santas and loved spreading holiday cheer. Kit played the trombone and spent time in Ireland playing the Bodhran (Irish drum). He was a loving husband, father and grandfather who made many beloved memories with family throughout the years.

A Celebration of Life will be held at a later date this summer.

In lieu of flowers, donations may be made to the Santa Fund (https://nne.salvationarmy.org/manchester/santa_fund) or to Home Health and Hospice Care, Attn: Development, 7 Executive Park Drive, Merrimack, NH 03054 (www.hhhc.org)

To order memorial trees or send flowers to the family in memory of Christopher "Kit" Mason von Sück, please visit our flower store.