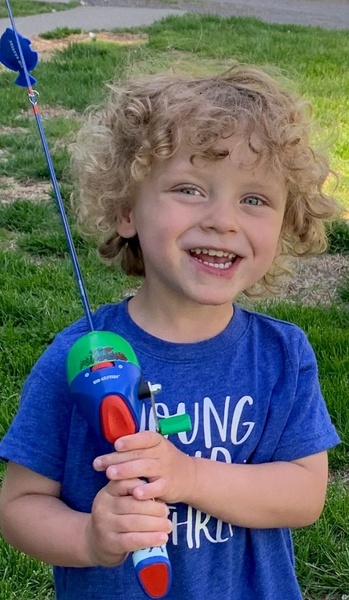 Duncan John Hayes passed away peacefully in his Auntie's arms on June 19th, 2022, after a courageous fight to overcome complications from surgery for a congenital heart defect. Born on February 7th, 2018, in Boston, Massachusetts to Joleen Sanderson and Jason Hayes, Duncan spent the last two years living with his Auntie Jenna Perusse in Brattleboro, VT along with his brother and cousins. Duncan attended West Bee Nursery School and adored his three teachers and all his classmates. He was a very affectionate little guy with a sweet and spicy personality, and everyone loved his George Washington curls. Duncan was given a wish through the Make-A-Wish Foundation and was overjoyed that Mickey Mouse came all the way from Disney World to meet him. In addition to his love of Mickey Mouse, Duncan loved the outdoors. He enjoyed family trips to the beach, the zoo, the pool, the park, or riding his scooter with his brother Eli and best friend and cousin Evie. He also enjoyed going to the movies and bowling. Duncan will forever be missed by his family who will cherish the short time they spent with him.

The Family would like to thank Boston Children's doctors, nurses, social workers, and child life specialists who took care of Duncan during his difficult hospitalization. In lieu of flowers, donations can be made to the Boston Children's Child Life Department in Duncan’s memory.

A church service will be open to anyone who was touched by Duncan’s journey. Services will be held at Saint Michael's Catholic Church, 47 Walnut Street, Brattleboro, VT on July 9th at 1:00pm. Immediately following the service, a celebration of Duncan’s life will take place at the VFW located at 40 Black Mountain Road in Brattleboro, VT.

To order memorial trees or send flowers to the family in memory of Duncan John Hayes, please visit our flower store.