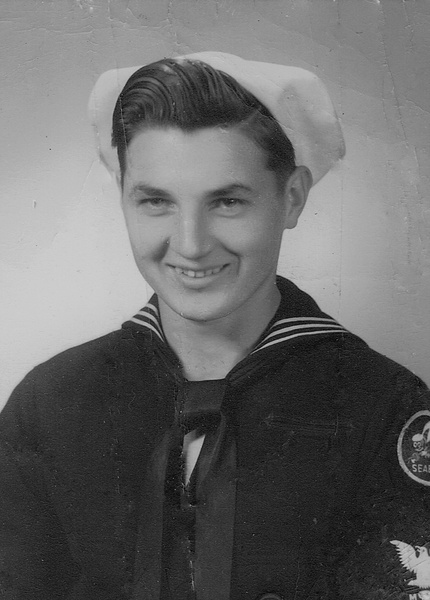 During World War II, he quit high school to enlist in the U.S. Navy at the age of 17 years old and served as a gunner. Shortly after that he joined the Seabees and was stationed in Okinawa during World War II. He was very proud of serving his country during such troubled times.

When he returned home from the War, he married his long-time sweetheart, Dorothy Florence, and attended N.H. College while working at Chicopee Manufacturing. After receiving his college degree, he went to work for International Paper Company as a packaging engineer and salesman until his retirement in 1989.

When he wasn’t working, Eddie enjoyed spending time with his family and friends, doing construction projects, helping others, working in his garden, and going out to eat with his wife and family, especially his grandchildren.

In lieu of flowers, donations can be made to Paws of Honor (donate on line Pawsofhonor.org) or the Salvation Army (121 Cedar Street, Manchester, NH 03101).

SERVICES: A memorial gathering will be held on Wednesday, July 13, 2022, from 4:00 to 6:00 PM at Phaneuf Funeral Homes and Crematorium, 243 Hanover Street, Manchester, NH. A memorial service will follow at 6:00 PM. Interment will be held at a later date at the NH State Veterans Cemetery, in Boscawen, NH.

Assisting the family with arrangements is the Phaneuf Funeral Homes and Crematorium, Hanover St.

To order memorial trees or send flowers to the family in memory of Edwin F. Babel Jr., please visit our flower store.