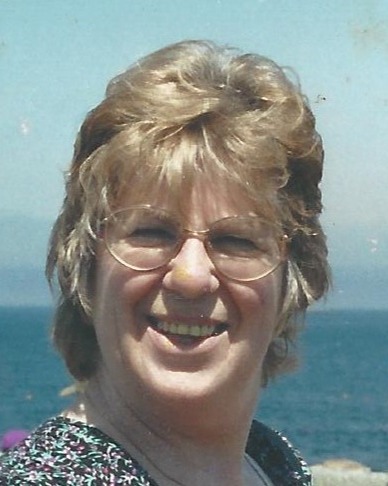 Elaine Ruby Kelley, 81, died September 5, 2022, after a prolonged illness.  Elaine was born March 23, 1941 in Providence, RI to William and Dorothy Blanchard.  She was raised in Windham, NH along with her 4 brothers and 1 sister.

Elaine graduated from Nashua High School and later went to do various jobs.  She worked for various places including RDF, MACOM, Mongomery Wards, and Merrimack Jewelers.

She worked at Bise’s IGA in Merrimack, NH where she met the love of her life, Edward Kelley, who would soon ask her son’s Bruce Reichard and Steven Reichard (from a previous marriage to Paul Reichard) for their mother’s hand in marriage.  Elaine and Ed were married on July 12, 1986.

Elaine and Ed traveled together, played cribbage together, were members of Londonderry Christian Church, and were known in their development as “Elaine and Ed” or “the couple who hold hands when they walk”.  In the last few years, Parkinson’s Disease made traveling and activities difficult.  Elaine was home-bound the last year of her life receiving many visits from those who knew and loved her.

A visitation will be held on Monday, September 12th from 11am-12pm at The Phaneuf Funeral Home & Crematorium, 243 Hanover Street in Manchester. A funeral service will follow at 12pm in the funeral home. Interment at New Hampshire State Veteran Cemetery at 1:30pm. Family and friends are kindly invited to attend.

To order memorial trees or send flowers to the family in memory of Elaine R. Kelley, please visit our flower store.