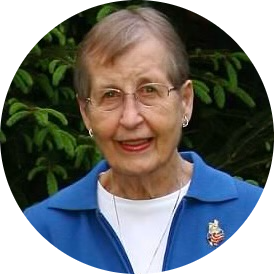 Enid left this world peacefully during the early morning hours of April 26, 2022 at Elliot Hospital in Manchester, New Hampshire.  She was the first born child of Neil MacLeod and Mildred Varner Muttart, both of Prince Edward Island, Canada.  Her father was a public servant and distinguished WWI veteran of the 105th Battalion Prince Edward Island Highlanders and her mother was an artisan.

At the end of World War II, 14 year old Enid immigrated to Enfield, New Hampshire with her mother.  She became a naturalized U.S. citizen in 1949.  After graduating Enfield High School in 1949, Enid worked as a bookkeeper at Baltic Mills in Enfield, where her mother also was employed.

Arthur Charles Chandler, Jr. and Enid announced their engagement early in 1952.  On February 9th of that same year, the two were married at the Enfield Congregational Church and left for their Niagara Falls honeymoon.  They returned to Lebanon, where Arthur ran the family business, The Hanover Street Garage.  In 1960, Arthur sold the family business to begin his career as an aerospace engineer.  Art and Enid relocated to Cape Canaveral with their three sons: Arthur III, Malcolm, and Stuart.  Son David was born in 1961 when they had settled in Cocoa Beach, Florida.  Enid loved her family, her faith and her community.  She devoted her life to raising her children and was a volunteer in various school and church organizations.

The couple had retired from their careers in the aerospace industry and relocated from Laurel, Maryland to Newbury, New Hampshire in 1994 to enjoy a panoramic view of Lake Sunapee.  Enid continued to live a full and Godly life as a devoted wife to Arthur Charles Chandler, Jr. who predeceased her in 2010.  They became active members of Kearsarge Presbyterian Church where they sang in the choir, supported the church’s fellowship and mission, and made lasting friendships within the community.

Enid is held in the highest regard as a nurturing mother by her four sons Arthur (who predeceased her in 1994), Malcolm, Stuart, and David.  Enid was a caring grandmother to Lauren, Douglas, Cormac, Natalie, Sadie Mae, Arthur IV, Kent, Jennifer, Brian, Aiden and great grandmother to Emma, Isabella, and Waylon.

Enid’s Canadian sister Barbara pre-deceased her.  However, she is survived by Barbara’s husband Trevor Campbell, Flora (nee MacLeod) & Kenny Thompson, Angus MacLeod, Gayle MacLeod, and Sam & Debra MacLeod, as well as many nieces and nephews, all of Prince Edward Island.

Memorial services will be held at the Kearsarge Presbyterian Church in New London at 11:00 a.m. on May 5, 2022.  Enid’s internment at Valley Cemetery in Lebanon will follow.  All friends and family are invited to attend.