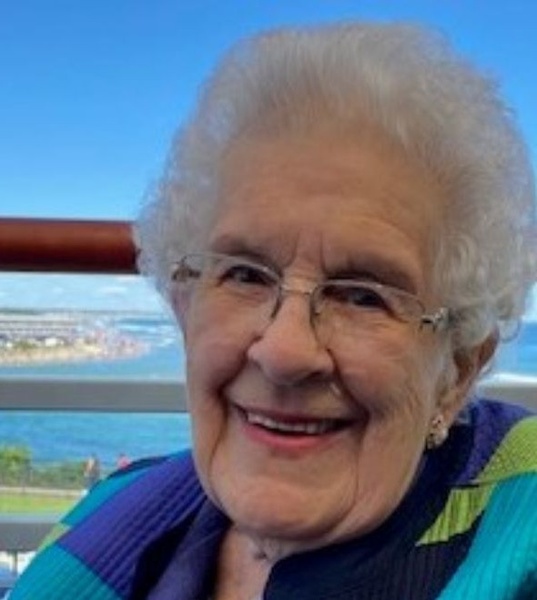 She was born on December 28, 1925, the daughter of Ellison and Gertrude (Haggett) Ring and grew up in Franklin. She was a graduate of Franklin High School, class of 1944 and New Hampshire School of Accounting and Finance class of 1945 (now Southern New Hampshire University). After graduation she was asked by the owner of the college, Harry A.B. Shapiro to be his full-time secretary. She continued to be employed by the college in many capacities and was the Applications Coordinator when she retired after 47 ½ years. Since retiring she has watched Southern New Hampshire University grow from the 100+ students when she attended the college into the thousands of students enrolled today.

She had many interests including sewing, knitting, crocheting, reading, cooking, gardening, dancing, camping, and frequenting her favorite restaurants with her family and friends. During her retirement, Fay enjoyed taking to the sea and had traveled on 30+ cruises. When not on the sea, she enjoyed taking many bus trips. Fay became Director of Hospitality for the Bedford Seniors for eight years as well as a member of the Board of Directors.

Fay was a communicant of St. Raphael’s Church in Manchester. She was predeceased by her husband, Thomas A. Bulcock, retired Manchester Deputy Chief of Police; her parents, two sisters, Naida Welch and Elspeth Ring; her brother Ellison Ring, Jr. and son-in-law Terry Nisi.

Members of her family include her daughter Maureen A. (Bulcock) Nisi of Manchester; her son Thomas E. Bulcock of FL; two grandchildren Jennifer A. Bulcock and Joseph W. Bulcock and one great granddaughter, Victoria Bulcock and her sister-in-law Rosalyn Condon of Cutler Bay, FL; and several nieces and nephews.

A memorial gathering will take place at Phaneuf Funeral Homes and Crematorium, 243 Hanover St. on Tuesday December 14th, from 4 to 6 PM with a memorial service to follow in the funeral home chapel at 6 PM. Burial will be at St. Joseph Cemetery, 448 Donald Street, Bedford, NH on Wednesday, December 15th at 10:00 AM. In lieu of flowers, a donation in Fay’s memory could be made to a charity of your choice. To view an online tribute, send condolences to the family, or for more information, visit www.phaneuf.net.

To order memorial trees or send flowers to the family in memory of Fay E. Bulcock, please visit our flower store.