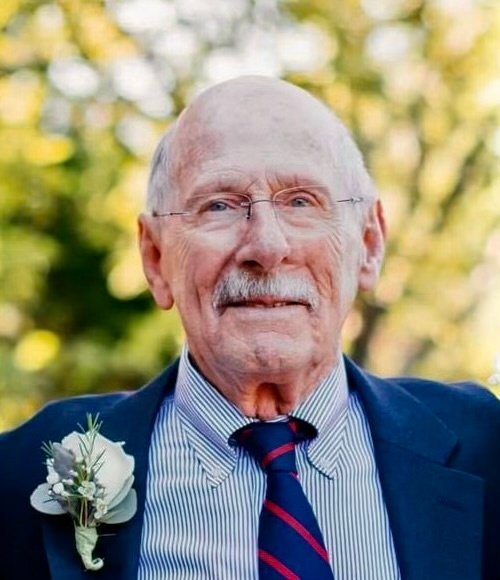 Francis W. Robinson passed away on March 16, 2022, at the age of 88. He is predeceased by his wife of 56 years, Jean M. (Callahan). Frank is survived by his three children, Frank Jr. and his wife Lisa of Boca Raton, FL, David and his wife Patricia of Townsend, MA, and Ann Masterson and her late husband James of Manchester, NH. Frank had 8 grandchildren; Andrew and his wife Aury, Frankie III, Stephen, Allie, Jenna, Courtney, Sam, and Nina, and one great grandchild, Aliya.

Frank was born and raised in Lynn, MA. After graduating from Lynn Tech HS, he enrolled in the US Air Force. The majority of Frank’s deployment was spent in Germany but he loved to tell stories of his travels throughout Europe and Africa.

When he returned to the US, he began his 37-year employment at Boston Edison.  But most importantly he met the love of his life, Jean. They raised their family in Wakefield and Andover before moving to Bedford, NH in 2010.

In his younger years he was an avid skier, but his true passion was golf.  He maintained a single digit handicap throughout his life and was a longtime member at Andover C.C. Despite his excellent play and many accolades in the game, a hole in one eluded him until the age of 53.  Amazingly, over the next several years, he got four more before retiring from the game he loved.

Frank, Jean, and their family enjoyed many summers at York Beach and exploring the White Mountains.  He stayed active later in life, mostly by following sports and current events, and was never shy about expressing his opinion on these matters.

Services will be private and in lieu of flowers, please make a donation to the Ukrainian Red Cross.

To order memorial trees or send flowers to the family in memory of Francis W. Robinson, please visit our flower store.