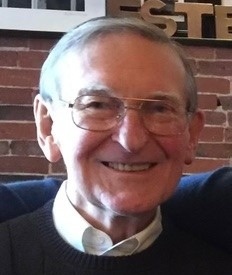 Mr. Kace was born on September 20, 1929 in Boston MA, the son of the late Frank and Barbara Kace (Kacziarauskis). He was a 1952 graduate of the University of Maine, earning a B.S. in Agronomy.

He was a veteran and served as 1st Lieutenant in the United States Army during the Korean War.

He was a communicant of St. Joseph Cathedral in Manchester NH.

Mr. Kace was a die-hard New England sports fan, predominantly the Boston Red Sox. He was an avid fisherman, especially for land-locked salmon in Lake Winnipesaukee. He participated with his wife in the love of antiques and the antiques business world. Above all else Mr. Kace loved his family.

If you have gotten this far, you can see that Frank lived a full life. We can hear Frank now, "Sharon you need to stop obsessing about my Obituary. . . For the Love of Mike, Sharon, It's Perfectly Adequate"

SERVICES: Calling hours will be held on Friday, August 19, 2022 from 6 - 8 p.m. at Phaneuf Funeral Homes & Crematorium, 243 Hanover Street in Manchester. A Mass of Christian Burial will be celebrated on Saturday, August 20, 2022, 11 a.m. at St. Joseph Cathedral Chapel, 145 Lowell St. in Manchester. A private interment will take place at a later date.

In lieu of flowers and to perpetuate Mr. Kace's memory of his sister, Josephine, donations can be made to the American Diabetes Association diabetes.org.