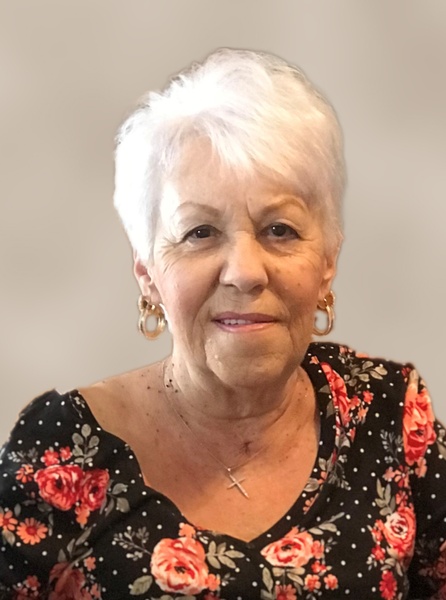 Georgette Leda Ouellette, 78, longtime resident of Manchester, passed away on May 6, 2022 at Christiana Hospital in Newark, DE. Born in Green River, New Brunswick, Canada on July 25, 1943, she was a daughter of the late Leopold and Annette (Girard) Therrien. She shared 35 years of marriage with her late husband, Joseph “Jerry” Ouellette, who predeceased her in 2000.

Georgette was raised in Canada and moved to Connecticut after she was married. She and Jerry started their family in Connecticut and later moved to New Hampshire. Georgette lived in Manchester for over 40 years and knew many people in the community from years of waitressing at Anton’s and Chez Vachon. In her spare time, she enjoyed shopping and was always on the hunt for new accessories. She was an amazing cook and her family always looked forward to the wonderful food she would make for family gatherings. Family was paramount in Georgette’s life and she will be deeply missed by her loved ones.

Georgette is survived by her daughters, Nika Hipsher and her husband Mick of Townsend, DE, Sandra LaRose of Manchester, NH, and Karrie Manning and her husband Joe of Manchester; her siblings, Leola Martin and her husband Joe of Canada, Adrian Therrien of CT, Clairmont Therrien of Canada, and Kathleen Ouellette and her husband Archie of Canada; her grandchildren, Koree LaRose, Chad Hipsher, Brooke LaRose, Taylor Manning, Quinton Hipsher, Emily Manning and Shayla Hipsher; five great-grandchildren; as well as many nieces, nephews, extended family members and friends. In addition to her husband and parents, Georgette was predeceased by her grandson, David LaRose, her great-granddaughter, Harmony, and her siblings, Raejean Albert and Gerard Therrien.

Georgette’s visitation will be held at Phaneuf Funeral Homes and Crematorium, 243 Hanover Street, Manchester, NH on Friday, May 13th from 9am-12pm with a service in the funeral home chapel at 12pm. She will be laid to rest at St. Joseph’s Cemetery in Bedford.
To order memorial trees or send flowers to the family in memory of Georgette Leda Ouellette, please visit our flower store.