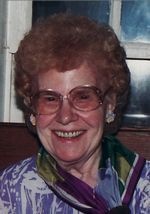 LISBON, NH -- H. Jane (Evans) Whitney, author of Janes Grammar Guide, died, at age 90, on May 1st at Cottage Hospital. Mrs. Phil Whitney was known as Mrs. Jane Evans to the thousands of children whose grammar she painstakingly sought to improve and whose vocabulary she rigorously endeavored to expand throughout 41 years of teaching. After having taught music for 2 years at Dow Academy in Franconia, she taught for 30 years at Lisbon School (in the World War II-era annex known as the chicken coop). Hawk-eye Evans, as she was affectionately known  due to her pupils belief that she had eyes in the back of her head -- was the proud mother of Gail Evans (who died in Australia after having taught special education there for 20 years) and Audrey Di Maria (an art therapist in Washington, DC), who is married to Ken Nankervis (of Melbourne, Australia).

When not teaching, Mrs. Whitney spent her life in service to her church and her community, founding and directing the choir at the Congregational Church in Lisbon, playing the organ at the Church of the Epiphany in Lisbon, teaching inmates at the Grafton County Jail to read, playing her violin for residents of nursing homes (as part of the Rubemas musical group), and, with her husband Phil, making dolls and doll-beds for children in need. Days before her death, she was knitting hats and scarves for the homeless of Washington, DC, something she had done for 25 years.

Mrs. Whitney had been a member of Delta Kappa Gamma International Society of Teachers, the North Country Chorus, the Eastern Star, and the Lisbon Prayer Group, and a Daughter of the American Revolution.

Born in Keene, NH to William Wallace and Mabel (Vaughan) Jeffery, Mrs. Whitney graduated from Keene Normal School before teaching in Marlowe, NH for 4 years and in Portsmouth, RI for 6 years. She is predeceased by her daughters father, Retired Major Harold A. Evans, her husband Mr. Phil Whitney of Stephens City, Virginia, and her brother James Berkley Jeffery (whose wife Joan lives in Concord). Surviving siblings include Mrs. A. Paul (Barbara) Stimson of Bath, William Wallace Jeffery, Jr. (and his wife Dorothea) of Nashua, and Kenneth Edwin Jeffery (and his wife Geraldine) of Nelson. Besides a number of nieces and nephews throughout the States, Mrs. Whitney has 3 grandchildren and 5 great-grandchildren in Australia.

SERVICES -- A funeral service will be held Sunday, May 11, at 2:00 PM at the Church of the Epiphany, School Street, Lisbon, followed by a reception at Whitemount Farm in Bath.

In lieu of flowers, donations may be made to the Lisbon Public Library, School Street, Lisbon, for the Handicapped Accessible Entrance Fund.

Arrangements and care have been entrusted to the Pillsbury Funeral Homes and Cremation Service, Inc. To view an online memorial or to send a message of condolence, please visit www.pillsburyfh.com.
To order memorial trees or send flowers to the family in memory of H. Jane Whitney, please visit our flower store.