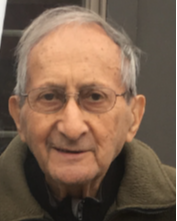 The funeral service will be held at 11:00 am at the Bethlehem Hebrew Congregation, located at 39 Strawberry Hill Rd. Bethlehem NH 03574. Burial will follow the funeral at Maple St. Cemetery, located at 17 Cruft St. Bethlehem.

Harold was born in Brooklyn, NY on October 4, 1930. After his third year of college, in pursuit of a law degree, he was drafted by the US Army to serve his country in the Korean War.

Harold was married to Sue Friedman, whom he lovingly referred to as, “Big Red,” because of her vibrant red hair, for 59 years until her passing in 2018.

He enjoyed working on his yard and was a meticulous groundskeeper of many ornamental shrubs and perennial flowers. Harold loved saltwater fishing and owned a number of boats for many years, taking his three sons out frequently off the south shore of Long Island. He enjoyed skiing and brought his family on frequent trips to Vermont and New Hampshire, eventually deciding that it would be more convenient having a place of their own rather than depending on availability of lodging. In 1982 he purchased and gradually remodeled an unoccupied cottage in the town of Bethlehem. When he retired in 2001, he decided to follow his son Russell who had moved to town 6 years prior, and bought a larger home, also in Bethlehem. Harold served two terms as Selectman in Bethlehem and worked on the Zoning Board.

To view Harold's Online Tribute, send condolences to the family, or for more information, visit https://phaneuf.net/ .