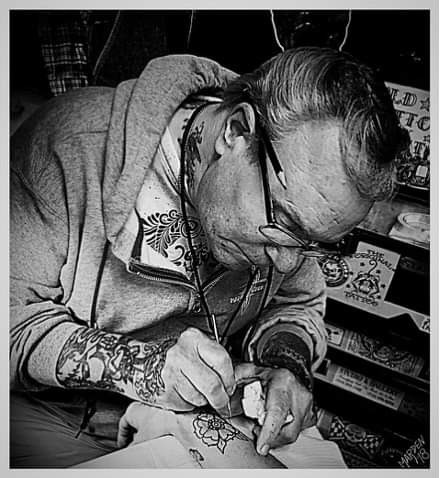 Jeff was born in Franklin, New Hampshire, to Maurice and Therese (Lemire) Denoncour, on August 25, 1951. Jeff was one of six siblings, and graduated from Franklin High School in 1970. After graduating from High School, Jeff joined the US Navy and proudly served from January 21st, 1971 until November 12, 1974.

As a child, Jeff loved to draw. In 1969, he got his first tattoo. In 1974, Jeff began tattooing in an apprenticeship with Sailor West. Jeff grew into a prolific tattoo artist, opening up his own shop called LA East in Lakeport, NH in 1977. In the 1980s, he discovered a world of tattooing outside of New Hampshire, and travelled the country tattooing in conventions, carnivals, and fairs, including in Boston, Massachusetts; Biloxi, Mississippi, and Daytona Beach, Florida. Jeff later settled back in the Lakes Region in the 1990s, working for S n’ J Tattoo in Loudon and Belmont, again for LA East, and going on to work for Old Skool Tattoo in Laconia, Jim’s Tattoo on the seacoast, and Spider Bite Tattoo in Manchester, NH, for long stretches. Most recently, he was guest spotting at different shops.

Weirs Beach was close to Jeff’s heart and he tattooed there during Bike Week for over 45 years. A respected artist and local legend, Jeff won numerous awards, and was featured in magazines and film documentaries for his work. He was known as a master of traditional American style tattoos. Jeff’s legacy will live on through his artwork – through the artistry of the apprentices he mentored over the years, through his flash framed on the walls of tattoo shops and private homes, and of course, through his tattoos, adorning the bodies of thousands of people, including countless friends and family.

Among his family, Jeff was known for his kindness and easygoing nature. He was a fixture at family gatherings and always enjoyed time spent with his loved ones, especially his son Jason, who he regarded as his greatest pride and joy. Jeff was a friend, a teacher, and a gentleman, and he will be missed by all who knew him.

Jeff is survived by his son, Jason Denoncour, of Laconia, NH; his aunt, Jeanette Marcucci, of Eastham, MA; and his five siblings and their spouses: Anne and Peter David of Glen Rock, NJ; Mark and Theo Denoncour of New Hampton, NH; Michele and Stephen Landry of Tilton, NH; Carol and Ra Montambeault of Franklin, NH; and Paul Denoncour, of Ballard County, Kentucky.

Graveside service for Jeff with military honors will be held on Thursday, April 7, at 11am, at the New Hampshire State Veterans Cemetery, 110 Daniel Webster Highway in Boscawen, NH. Family and friends are invited to attend a Celebration Of Life following immediately at Laconia Rod & Gun Club, 358 S Main Street in Laconia. Phaneuf Funeral Homes & Crematorium is assisting the family with arrangements. To view an online memorial, leave a message of condolence, or for more information please go to www.phaneuf.net.

To order memorial trees or send flowers to the family in memory of Jeffrey P. Denoncourt, please visit our flower store.