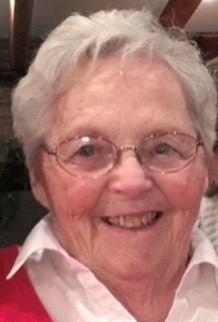 Joan M. (Sullivan) Rees, 89, a proud Air Force Veteran, passed away peacefully at home on Sunday, May 8, 2022 surrounded by family after a long battle with Alzheimer’s Disease.

Joan was born on January 2, 1933 in Quincy, MA to parents James F. Sullivan and Mary A. (D’Arcy) Sullivan. She earned her Bachelor of Science in Nursing from Boston College in 1954 and was a staff nurse at the Jamaica Plain VA Medical Center in Boston before entering the United States Air Force. Joan served as a First Lieutenant, AF Nurse Corps, stationed at Bolling AFB in Washington D.C. from 1956–1958.

She married Harry C. Rees Jr. on October 19, 1958 and raised two sons and four daughters after moving to Massachusetts in 1960. Joan was a devout Catholic, rarely missing Sunday mass. She enjoyed reading and clipping news articles. Joan was an avid note taker, detailing daily activities in her calendar. Because of this, we know that on September 8, 2004, she and Harry went to lunch at the Lobster Boat Restaurant in Merrimack, NH.

In addition to her parents, Joan was preceded in death by Harry, her loving husband of 61 years, in February 2020, and her brothers James F. Sullivan and Paul D. Sullivan.

SERVICES: Visitation will be held on Sunday, May 15th from 3:00 to 5:30 PM at Phaneuf Funeral Homes, 172 King Street, Boscawen, NH. A Mass of Christian Burial will be celebrated on Monday, May 16th at 10:30 AM, St. Andre Bessette Parish at Sacred Heart Church in Laconia, NH. Committal prayers and military honors will follow at 12:30 PM at the NH State Veterans Cemetery in Boscawen, NH.

To order memorial trees or send flowers to the family in memory of Joan M. Rees, please visit our flower store.