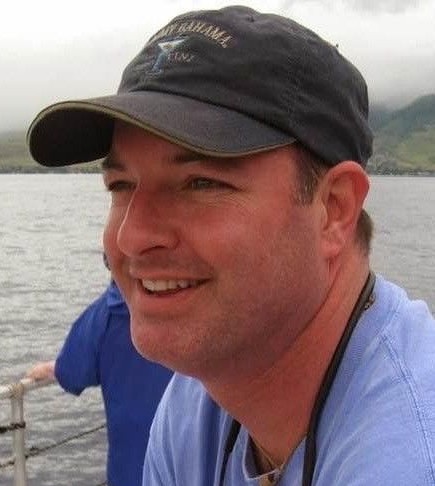 Ken was born in Florissant, MO on March 19, 1967, the son of Kenneth F. and Doris (Pohlmann) Vessell. His family moved to Ca when he was 3 and he spent most of his life there occasionally traveling back to MO to visit extended family after his father remarried. In 2003, he met his wife and they married and have 2 beautiful children. They moved to New Hampshire in 2013, where his wife had grown up, and he quickly embraced the slower pace of life and found a new love in taking care of his homestead and his family. Ken's lifetime career had been in the automotive service industry as an advisor, and after moving to NH, he advanced quickly to Service Director at Lexus where his dedication and excellence earned him many awards including trips for him and his family. Although he had a love of all sports, he was a devoted USC Football fan even after moving to the east coast. He enjoyed sharing his love of motorsports with his son and made a tradition to go to a race every year. It was always important for him to be surrounded by the people and things he loved. From using his culinary skills and entertaining in his home to playing on a Men's Hockey Team to being a performer in Laguna's Pageant of the Masters.

He is survived by family members which include his wife of 15 years, Jennifer (Silvia) Vessell; his son Greyson and daughter Madeline Vessell of Mont Vernon; his mother Doris and step father Geno Francia and his sister, Lisa Vessell. all from La Habra, CA; His step mother Donna Sentman; 2 half brothers Christopher and Chad Sentman; His step brother John Francia and step sister Anna Maria Francia; His mother-in-law Eileen Silvia; his brother-in-law Brian Silvia; and his uncle, aunt and many cousins.

A celebration of his life will take place on Sunday, September 12th from 1:00 to 4:00 PM at his residence at 3 Kendall Hill Rd in Mont Vernon. In addition, there will be another celebration of his life on Saturday September 25th from 1:00 pm to 4:00 pm at the Heritage Village Clubhouse, 1589 Merced Ave, La Habra CA 90631 (Off Beach Blvd, between Lambert Rd and La Habra Blvd.). Phaneuf Funeral Homes and Crematorium, Manchester, is in charge of arrangements. To view an online tribute, send condolences to the family, or for more information, visit www.phaneuf.net.

To order memorial trees or send flowers to the family in memory of Kenneth Lance Vessell, please visit our flower store.