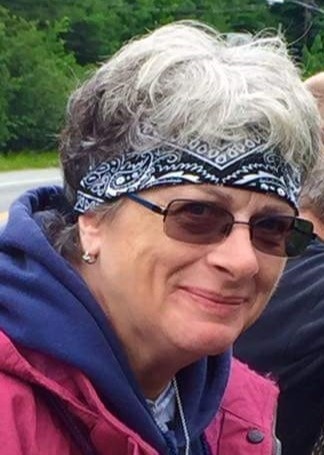 Lauri Ann Flannery Wayne passed away peacefully, surrounded with love, Monday, March 28th, at the age of 59, after a courageous battle with Multiple Sclerosis and Parkinson’s. Lauri was born April 6, 1962, in Presque Isle, ME. Daughter of John Flannery and Francis Temple. Lauri attended Deering High school and Pembroke Academy, class of 1980. Continuing her education, she studied graphic design and photography at NHCTC and NHIA. Lauri had a long-time career at Merchants Automotive Group as a community services administrator retiring in 2012.

After retiring from Merchants, she often volunteered her time as a Flag Line Captain/web administrator or organizing events for the NH Patriot Guard Riders. Her greatest joy in life was adventuring on the back of a motorcycle with her loving partner Bob Dorey. Lauri was rarely seen without her camera in hand, immortalizing and freezing every memory. She was a mixed media artist and spent countless hours creating. If you had been lucky enough to meet Lauri, you knew her personality was infectious, and she could brighten even the darkest of days with her witty humor. Unquestionably her finest quality was her bottomless well of selflessness, love, and compassion.

A celebration of life for Lauri will be announced at a later date. Memorial donations may be made at www.nhpatriotguard.org. Phaneuf Funeral Homes & Crematorium is assisting the family with arrangements. To view an online memorial, leave a message of condolence, or for more information please go to www.phaneuf.net.

To order memorial trees or send flowers to the family in memory of Lauri Ann Flannery Wayne, please visit our flower store.