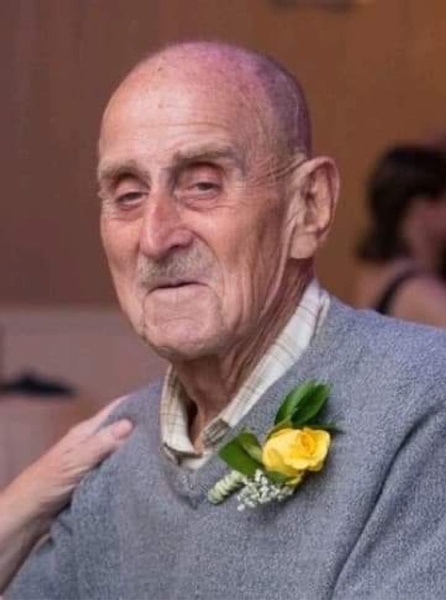 Leo Charpentier, 91, a lifelong resident of Manchester, NH, died suddenly on April 20, 2021. He was born in the city on January 22, 1930. A son of the late Ernest and Marie Ange (Tremblay) Charpentier. Leo was French-Canadian, raised catholic, and was one of nine children. He was authentic. Just an honest, loving, and hardworking man who believed everyone was a friend of his. He will be missed by many in the community.
As a young man, he served three years in the Air Force before returning home to marry the love of his life. On April 19, 1952 Leo happily married Elizabeth E. Blood, "Betty." Together they had three children Elaine, David, and Henry. He supported his family as a construction worker, building most of the Queen City as we know today, and was part of the Laborers' Local 668. After he retired, he continued to work for almost three decades at the law offices of Moquin and Daley, who he considered a second family.
Staying active and busy was the key to his long and healthy life. He never knew how to quit as his wife would tell you. He did know how to have a good time. He enjoyed things like listening to music, drinking 7&7s, playing cards, going to Vegas and Foxwoods, reminiscing and joke telling. He was an active member at the west sides Alpine Club, the Rimmon Club, and the American Legion. You could find him every Sunday morning in church. He spent many years attending St. Patrick's before they closed and later Saint Raphael the Archangel Parish.
His home was always filled with family and good company. He loved spending every moment with his grandchildren and great-grandchildren. All the way to the very end, his family was by his side. We love you Pep.
He was recently predeceased by his loving and devoted wife of 68 years, Betty, who would have turned 91 on the day Leo passed away. He also lost his grandson, Sean M. Charpentier, in 2017. As well as brothers - Armand Charpentier, Roland Charpentier, George Charpentier, Roger Charpentier, and Albert Charpentier and their sister Jeannette Montour.
Members of Leo's immediate family include his daughter Elaine Ferland and her husband George of Sanbornton; his sons David Charpentier of Pinardville and Henry Charpentier of Manchester; his grandchildren, Jason Charpentier of Manchester, Eric Maltais of Epping, Sara Tarara and her husband Michael of Fitchburg, MA, and Crystal Pettis and her husband Aric of Manchester; as well as great grandchildren Kendal Soucy, Waylon Soucy, Nicholas Tarara, and Genevieve Tarara; his brother Robert Charpentier and his wife Irene; and sister Theresa Grenier; and many extended nieces, nephews, and cousins.
SERVICES: A memorial gathering will be held on Monday, April 26, 2021, from 10:00 AM â€“ 12 Noon at Phaneuf Funeral Homes & Crematorium, 243 Hanover Street, in Manchester. A memorial service will follow in the funeral home chapel at 12 Noon. Those in attendance are respectfully requested to wear face coverings and practice social distancing. Committal prayers and interment will follow at Mt. Calvary Cemetery in Manchester. Leo will be laid to rest, next to his wife.
Phaneuf Funeral Homes and Crematorium assisted the family with arrangements. To view an online memorial, leave a message of condolence, or for more information please go to www.phaneuf.net
To order memorial trees or send flowers to the family in memory of Leo Charpentier, please visit our flower store.
Send a Sympathy Card