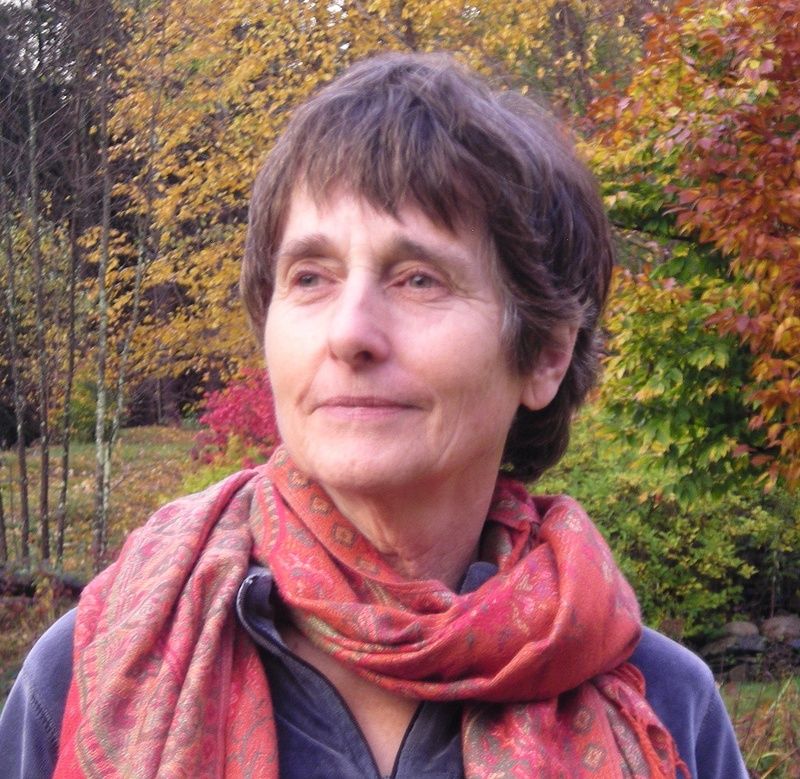 Marjorie "Mimi" Morton, 74, of Guilford, VT was born on February 9, 1946 in Riverton, New Jersey, Mimi died at home of pancreatic cancer on January 10, in the presence of her husband, Rick Zamore, her daughter Kathryn Jezer Morton, and her stepdaughter, Leah Zamore. She was named Mimi by her twin brother, John, when he was learning to talk. John and his wife, Pat, had a last visit with Mimi two days before she died.

Growing up in the Victorian town of Riverton, on the Delaware River, she learned to sail with her brother, acquired her phenomenal cooking and housekeeping skills from her mother, Helen (Landers) Morton, and developed a life-long passion for gardening at the side of her father, John Morton.
Educated in the local public schools, she originally came to Vermont to attend UVM, graduating Phi Beta Kappa with a BA in Literature in 1968. A Junior year abroad in Scotland incited her love of travel. She received an MA from the University of Chicago and taught for a year at Central Illinois College, an experience she described as "spooky" in the era before the Women's Movement. She then earned a PhD with distinction from McGill University in Montreal, Quebec, where she settled.

She taught English and Humanities for nearly 30 years at Dawson College, in Montreal, where she helped found the Women's Studies program. During this period, she began writing fiction, earning attention but not money, so she moved into freelance journalism for magazines and newspapers in Canada and the U.S., and she also found work as a freelance broadcaster for CBC radio. She thoroughly enjoyed all her work in journalism, and she loved Canada, earning dual U.S./Canadian citizenship.

During a visit to the Packer Corners commune, in Guilford, she met and fell in love with Marty Jezer, an historian and anti-war activist. They divided their time between Montreal and Guilford, and in September, 1982 Mimi gave birth to their daughter, Kathryn, named for her godmother, Kathryn Kilgore. After 15 years, the partnership of Marty and Mimi ended, but they remained co-parents and friends.

Throwing herself into volunteer work, she became president of the Vermont Citizens Campaign for Health, advocating for a single payer health insurance, after being cured of breast cancer free of charge in 1999 by the Canadian health care system. She also served on the boards of the Friends of Music at Guilford, the Guilford Library, and the Guilford Historical Society. During the last few years of her life, Mimi spent thousands of hours as a Guardian ad Litem, advocating for children who are under the supervision of the Vermont court system through no fault of their own. She found her GAL work especially meaningful.

Mimi completed two books during her final illness. "Before the Age of Reason, a Memoir of Racism," is available at Everyone's Books in Brattleboro, and a collection of her superb short stories will be available there in February or March. She gained peace and clarity through her practice of Budhism with her sangas and teachers Mannie Mansbach, Emily Wiandro, and Walter Hagadorn.

In addition to her husband Rick, daughter Kathryn, and her step-daughter Leah Zamore, Mimi is survived by her son-in-law Gray Miles, and her two adored grandsons by Kathryn and Gray, Jesse (10) and Orion (7). Also by her brother John, his wife Pat, their daughters Emma Morton and Liz Kollmeyer, and Liz' husband Kip, and their baby, Jack. She maintained many close friendships formed in elementary school and college.

Mimi was known for her vivid and entertaining personality, her comprehensive memory, and her loving and generous spirit. She was often the funniest and smartest person in the room, and she liked nothing better than sitting at a large table full of friends and family, watching them enjoy some of her unforgettable cooking. She is greatly missed by many people.

Contributions in her name can be made to the Guilford Library.

A memorial service for Mimi is tentatively planned for Memorial Day Weekend.
To order memorial trees or send flowers to the family in memory of Marjorie Morton, please visit our flower store.
Send a Sympathy Card