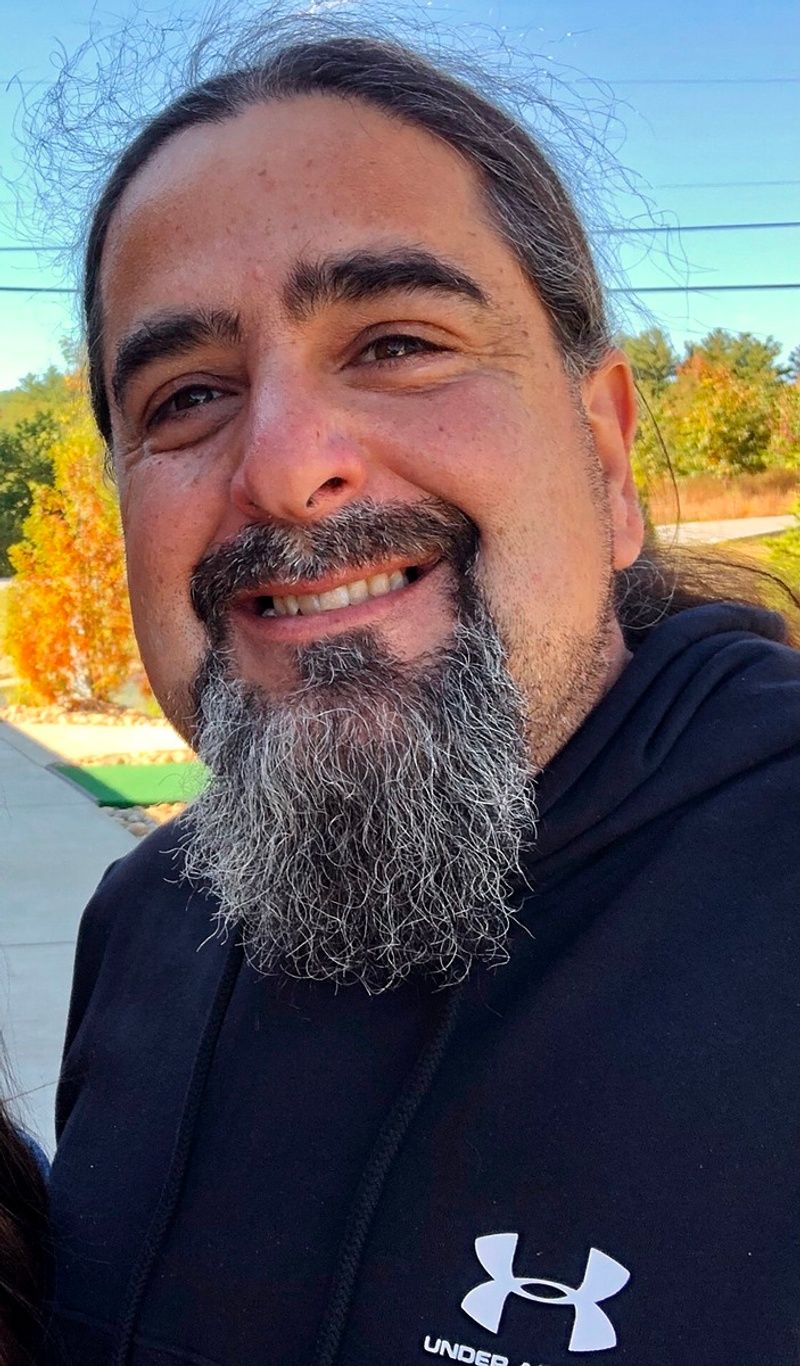 Matthieu George Pellerin, 49, of Manchester passed peacefully on June 7th, 2021 in Hooksett, New Hampshire surrounded by his family as he entered the Field of Dreams.

Matthieu was born in Manchester, New Hampshire on November 22nd, 1971. He is the son of Jean Pellerin and Therese (Maheu) Pellerin. He lived his whole life in Manchester, a Manchester boy through and through. He was a graduate of West High School and later earned a degree from Hesser College in Criminal Justice. Most recently, he very much enjoyed working with the residents at the Transitional Housing Program in Concord who he loved, respected, and always made the best egg sandwiches for.

He enjoyed jamming and playing the drums and was a member of many metal and cover bands. He loved Cape Cod, salsa, aliens, the X-Files, rainy days and snow storms, and was a devoted Boston sports fan, especially of the Red Sox. He built a mini Fenway whiffle ball park in his backyard (Pellway Park), complete with the Green Monster, a foul pole on the roof, and a backstop. He also loved to think outside of the box and his creativity and spirit soared whenever he created competitions, challenges, and riddles for family events like the Christmas games, Easter egg hunts, and Kid Survivor.

He loved the game of baseballâ€”both playing and coaching. As a child, Matt played for Manchester West Little League, Babe Ruth, Pony, Legion, and West High School. As an adult, he founded and pitched for the SNHMABL Black Sox team. He also spent years playing for the Merrimack Dodgers, and loved nothing more than playing in their yearly Labor Day Cape Cod Classic tournaments. One of the highlights of his baseball career was playing with the Nor'Easters in Fort Myers, Florida at the Red Sox Spring Training facility.

In his 30+ years of coaching, Matt coached at Manchester West and North Little League, Hooksett Little League, and the Greater Manchester Pony League at the Pony, Colt, and Palomino levels. He was also honored to be selected to coach many post season and All-Star teams. On Coach Matt's teams, everyone got to pitch. And out of the thousands of batting practice sessions he threw, Justin Horne remains the only kid he ever hit with a pitch.

He is predeceased by his father Jean and his beloved Grandparents George Maheu and Louise (Duplessis) Maheu, and George Pellerin and Yvette (Demers) Pellerin. He continues to watch over his mother Therese (Maheu) Pellerin, his two kids who he loves so muchâ€”Alexandra Louise Therese Pellerin and Jaken Matthieu George Pellerin, his flawless granddaughter Oakley Jean, four younger siblings Jennifer Lanteigne, Benjamin Pellerin, Francois Pellerin, and Nicholas Pellerin, his "Scully" Kathleen Abate, her sons that were like his own Julian Abate and Aidan Abate, his ginger pups Grant Hock, many other family members, nieces and nephews, bandmembers, teammates, friends, and the hundreds of kids all across New Hampshire who got to call him Coach Matt. He will be so missed by all who knew him but legends never die. #21 forever the GOAT.

A Celebration of Life will be held on Saturday, June 19th at Pellway Park. Please reach out to family members for the address if you are unsure of the location. Anyone is welcome to stop by or stay all day! In lieu of flowers donations may be made to The Matty P Project. More information about this project can be found on our GoFundMe page: https://gofund.me/966a9165

To order memorial trees or send flowers to the family in memory of Matthieu Pellerin, please visit our flower store.
Send a Sympathy Card