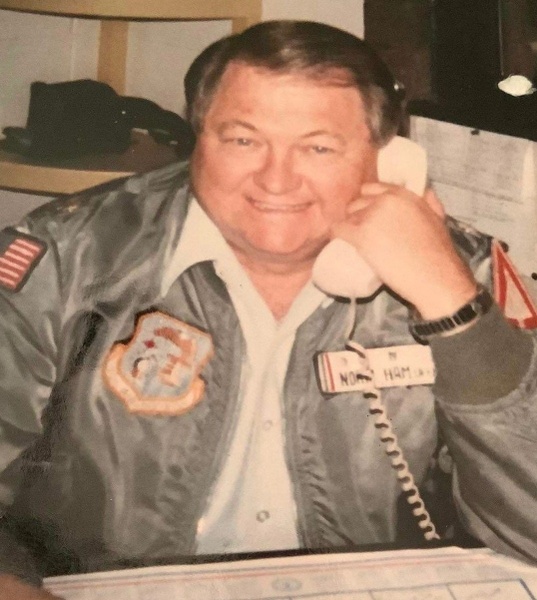 It is with heavy hearts that the children of Norman Robert Ham Sr. announce his passing on October 30, 2021, following a brief, but difficult illness. He was born in Rochester, New Hampshire on March 31, 1933. Norman was the beloved son of the late Rosina Marie (Levesque) and Albert G. Ham. He was predeceased by his son Michael John and three grandchildren, who died in infancy. He bids adieu to his beloved Rebecca Wadsworth of Hernando, FL, as his spirit takes flight. She was the sustenance of his life for the last 16 years. Norman was predeceased by his first former wife, Maryann Moran, Worcester, MA, who was the perfection of love and devotion to all of her six children. He is survived by his second former wife, Mary Murphy Ham, (Bruce), Windham, NH. She remains a supportive and devoted Mom to her only child, Matthew. Norman is survived by his sister Lorraine Kimball (Ray), Arundel, ME. Norman leaves six children: retired Brigadier General USAF Norman R. Ham Jr., (Adele), Fayetteville, GA; Kathleen M. Sampson (Donald), Coldbrook, Nova Scotia, Canada; Maureen A. Hilliard (Tim), Millis, MA; Paul F. Ham, Mooresville, NC; Carol Bradley (Kris), Sutton, MA; Ham, Matthew R. (Jaimie), Ossipee, NH. Norman has 17 grandchildren: Krystal, Megan, Kamie, Jeremi, Caitlin, Danielle, Katie, Ashley, Brodie, Kylie, Christian, Bethany, Nevin, Olivia, Colin, Cameron, and Murphy. He also has 9 great grandchildren: Hadley, Hayes, Bella, Anthony, Michael John, Ellie, Vivienne, Maya and Charlotte. He was immensely proud of all his family. In fact, he encouraged three sons and a grandson in their quest for careers in aviation. And, as he had done so long ago, his three daughters and several granddaughters work with children in education/mental health.

Norman completed his primary schooling in New Market, NH and when he turned 13, it was off to Assumption Preparatory School in Worcester, Massachusetts, where he excelled in academics and basketball. Upon graduation he was offered a basketball scholarship to the University of New Hampshire. In 1953 he entered the Pilot/Officers Training for the United States Air force and graduated as a Lt. in 1955. For 20 years this Air Force Fighter Pilot flew more than two hundred missions in Vietnam, Korea, Philippines, Japan, Laos, Cambodia, Morocco and beyond. He retired as a Major and was a proud and decorated war veteran. After retirement, he attended the University of Nebraska to study history and education; he earned a Masters in Counseling from the University of Virginia. Norman then created the ROTC program at Lowell High School where he shared his love of history and exemplified his patriotism for his beloved country. One of his proudest accomplishments was when he was invited to sing the National Anthem at the Boston Garden (several times). He had an amazing memory and was the ultimate story teller, relaying his adventures overseas and his love of history and the world’s people. One could not miss his booming laughter or when he would burst into song with his strong and beautiful baritone voice (most recently serenading passengers at gate 42, as they waited for their delayed flight). In retirement, he enjoyed travelling and he could often be found flying his airplane, visiting an air show or popping over for a surprise visit. Dad and so many other veterans have worked boundless hours to make our country a safer place to live and to raise a family. This world is a safer place for Dad having walked it/or flown it, and we are grateful for this. Dad, we pray that a band of angels sing thee to thy rest as you rest in the arms of Jesus. We love you always.

To order memorial trees or send flowers to the family in memory of Norman R. Ham Sr., please visit our flower store.