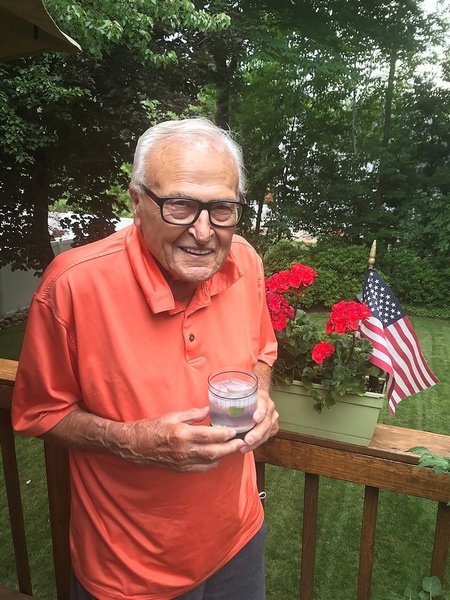 Philip was born June 28, 1925 in Manchester, NH. He is the son of the late Gakis "George" and Marigoula (Papaioannou) Gimas who immigrated from Greece to the US to provide their children better opportunities.

Philip was raised and educated in Manchester. He attended Manchester Central High School and was a member of the football team. After graduation Philip went on to serve his country during WWll.

Philip was very proud of his service to his country. An honorably discharged veteran, Philip proudly served his country as a member of the United States Navy, 1943-1946, aboard the US Fleet Hospital 105 as a Pharmacist's Mate Second Class, Asiatic-Pacific Theatre.

Upon returning to Manchester, NH after active military duty, Phil began his career in sales at Price and Quality (P&Q) men's clothing store. It was here he developed his sense of style that he carried through his entire life. Philip then joined the sales team at State Motors Lincoln where he worked for 55+ years. He continued to keep up with his lifelong occupation well into retirement and took great pleasure in the camaraderie he had enjoyed most of his life in the auto sales industry.

Philip was a husband, brother, uncle, and friend to many. He was a lifelong member of the YMCA and could be seen downtown using their facilities daily. Philip's greatest passions were playing golf and socializing with the many people he met throughout his life. Phil would enjoy a good drink or beer and conversation with friends. He was a member of both the Manchester Country Club and the Derryfield Country Club. He was a longtime member of the Sweeney Post and enjoyed time at the "table of knowledge". He was a New England sports enthusiast and watched the Red Sox and Patriots often. As a golfer, Phil liked watching the young local golf talent and would watch the PGA tournaments on most weekends at home.

In addition to his parents, Philip was predeceased by his beloved wife, Elaine (Kittredge) Gimas, and his five brothers, James, Peter, Arthur, Shokes and John Gimas. Three sisters, Cecile Gimas, Sandra Plaisance, and Cleona Seitz. Philip is survived by many nieces, nephews, and extended family and friends.

ARRANGEMENTS: His visitation will be held in the St. George Greek Orthodox Cathedral, 650 Hanover St., Manchester, NH on Thursday, June 17 from 10:00AM to 11:00AM. The Funeral Mass will be Celebrated at 11:00AM followed by Committal Prayers and Military Honors at Pine Grove Cemetery, 765 Brown Ave., Manchester, NH. Assisting the family with arrangements is the Phaneuf Funeral Homes and Crematorium, Manchester, NH. In lieu of flowers, expressions of sympathy may be made in Philip's memory to the American Legion Sweeney Post #2, 251 Maple St. Manchester, NH 03103. To view Philip's Online Tribute, send condolences to the family, or for more information, visit www.phaneuf.net.
To order memorial trees or send flowers to the family in memory of Philip Gimas, please visit our flower store.
Send a Sympathy Card