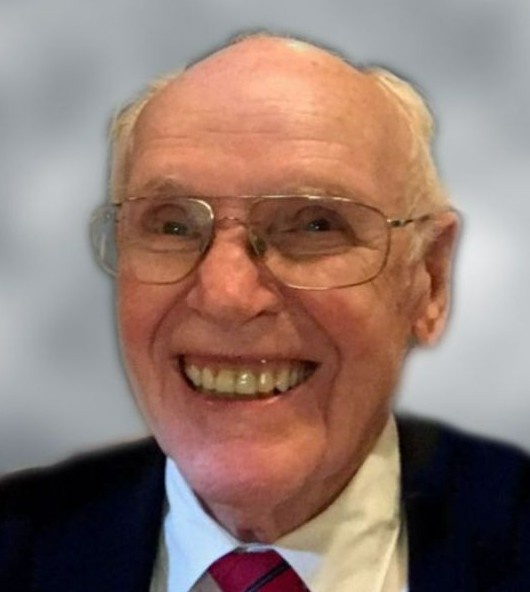 Philip Richard Stimpson went home to be with His Lord and Savior, Jesus Christ, at the age of 93. Born in Woodsville, NH, Phil came to Manchester to go to college in 1947. There he met the love of his life, Meredith. They were married for 73 ½ wonderful years. He was predeceased by many family members, including two sisters and two brothers. He is survived by his wife, Meri, and his daughters, Cynthia Morey and husband David and Deborah Granfield and husband William, grandchildren Becky, Ann and Billy, great-grandchildren Elijah, Josiah, Levi, Rachel, Ashley, Alyssa, Lucas and Ariella as well as a great-grandchild Jacob. They will all miss his playful teasing and pleasant manner.

Phil worked at Amoskeag Bank in Manchester for 39 years and retired in 1990 as an Assistant Vice President. He was known for being a worker above reproach and for his strong work ethic.

Phil loved gardening and his family enjoyed his fresh vegetables for years. He was so happy to share the fruits of his labor (especially his tomatoes) with his neighbors, his dentist, and anyone who would accept them!

Phil was famous for his frugal ways, and he brought that skill to the construction of the Bethany Covenant Church when it moved to its new place on Route 101 in Bedford in 1990. Many folks have chuckled over his practice of gathering up discarded nails to re-use to save money. He served as Assistant Treasurer during the construction and was very dedicated to the project. In addition to actively participating in the church, Phil and Meri found joy and purpose in serving in the Gideon organization. He was committed to distributing Bibles in hotels, camps, fairs, and especially to military personnel at the induction center. It was his desire to spread the word about the true and Living Christ. Stories of how the Bible changed peoples’ lives motivated him to continue that work for over 50 years.

Philip lived in Manchester for over 70 years and moved to Bedford Falls Assisted Living in September of 2020. Special thanks to the staff there for their loving care.

A Celebration of Life for Philip and his wife, Meri, who passed away on February 24, 2022, will be held at Bethany Covenant Church, 1 Covenant Way, Bedford, NH on March 26, 2022 at 11AM. The service will be livestreamed for those unable to attend in person. In lieu of flowers, it would honor Phil’s memory for people to send donations to the Gideons for continued world-wide Bible distribution either by check (noting it is in memory of Philip Stimpson) to The Gideons International, Attn: Larry Cuneo, 5 Westerly Drive, Derry, NH 03038 or online at www.gideons.org There is a place online to indicate that the donation is in memory of Philip Stimpson.

To order memorial trees or send flowers to the family in memory of Philip Richard Stimpson, please visit our flower store.
Send a Sympathy Card