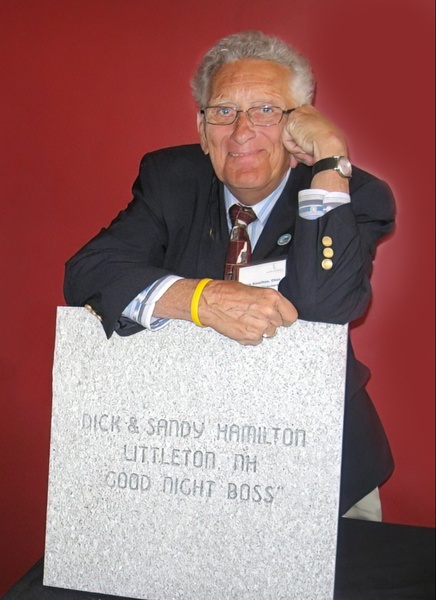 Richard Freeman “Dick” Hamilton, age 86, of Littleton, NH passed peacefully on July 20, 2022, at Riverglen House in Littleton after a period of failing health with family at his side. He was the husband of the recently departed Sandra E. Hamilton. They were married August 25, 1962, in Norwell, Massachusetts and were approaching their 60th wedding anniversary.

“Dick” was born on February 13, 1936, in Conway, NH, the son of Carroll Eastman Hamilton and Esther Louise Hamilton (Brackett). He was raised with 4 brothers. He graduated from Kennett High School in 1954 and went on to serve as a navigator in the USAF.  He returned to the White Mountains in 1957 where he began his tourism career as a bell hop at the Eastern Slopes Inn, delighting in sharing his love of the beauty of the mountains and its rich history with guests.  It is there he met his wife, Sandra Hakanson, and they started their 59-year marriage and love story.  In 1965, after a few years as a PR manager for a Michigan ski area, Dick and Sandy returned to NH to raise their children closer to family and Dick began work with the newly formed Ski 93 organization.

In 1968, he took the job of Executive Director of the White Mountain Attractions Association where he gave 35 years of service, helping shape tourism as a mainstay contributor to NH’s economy. Dick was a long-time advocate for New Hampshire tourism and the Old Man of the Mountain. He was considered to be the father of modern White Mountains tourism.

During his career he earned many accolades and awards for his visionary methods and positive impacts in promoting NH as a travel destination, including receiving the Business and Industry Association Lifetime Achievement Award (2016), the 2018 Granite State Legacy Award, and the NH Travel Council commissioned an award: ‘the Dick Hamilton Lifetime Achievement Award,’ to ensure his contributions were remembered.  He was known for his masterful consensus building and follow through which helped he and his colleagues in such accomplishments as getting the Kancamagus Highway and the White Mountains Trail designated as National Scenic Byways and making NH’s proudest and best attractions well known beyond the NH borders.

His most beloved and proudest professional accomplishment came after his 2003 retirement.  When the Old Man of the Mountains fell, he was devastated and made it his mission to create a lasting and fitting monument to his “Boss”.  He and a dedicated group of volunteers made it their mission to raise funds through private donation and construct what today is known as the Profile Plaza.  The innovative design, located in Franconia Notch State Park at the base of Cannon Mt, creates a meaningful remembrance and allows a visitor to experience seeing the Old Man in his former glory.

Dick’s personal life and interests were intricately woven with his career as he loved NH and its history.  He had an impressive collection of artworks that showcased gorgeous NH scenes, as well as White Mountain and Grand Hotel memorabilia that he loved to share and discuss.  His own photography has been widely published in articles and books.  Trains and antique cars were other passions, both which he lovingly collected and shared.  He was often seen in his 1956 or 1960 Cadillacs cheerfully attending grandchildren’s sporting events and in his last days enjoyed a ride through the Notch with his son in his 1987 Allante convertible, face to the sun, wind in his hair and giving one last “Good Night Boss” to the Old Man he cherished so much.

SERVICES: A memorial gathering will be held Thursday July 28, 2022, from 4:00 – 7:00 pm at the Pillsbury Phaneuf Funeral Home in Littleton.   A lakeside Memorial service will be held the following day, Friday July 29, 2022, beginning at 10:00AM at the Old Man of the Mountain Profile Plaza in Franconia Notch with several honorary speakers leading the service.  Family and friends are invited to attend.

In Lieu of flowers, the family asks that you make a memorial contribution in his name to the Profile Legacy Fund for the preservation of the Old Man of the Mountain, an organization Mr. Hamilton led since the fall of the Old Man in 2003.  You can donate on their website at www.oldmannh.org.

To view Richard's Online Tribute, send condolences to the family, or for more information, visit https://phaneuf.net/.

To order memorial trees or send flowers to the family in memory of Richard F. Hamilton, please visit our flower store.