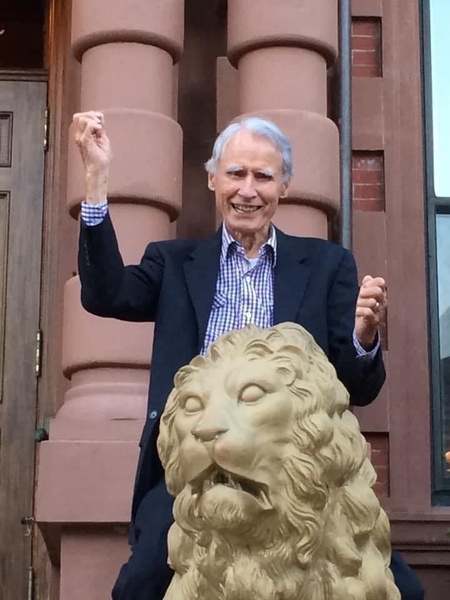 Robert Gerard Halliday, 96, of Goffstown, passed away peacefully in his home with his family by his side on May 11, 2022. He is the beloved husband of Eleanor (Silva) Halliday with whom he shared 36 years of marriage.

He was born in Woburn, MA to the late John and Marion (Duffley) Halliday. After graduating from high school, Robert enlisted with the United States Marine Corps and proudly served during WWII and the Korean War. He married the love of his life, Eleanor on March 22,1986, and after 34 years of dedicated service Robert retired from the Prudential Insurance Company in 1990.

Robert embodied the value of integrity and stayed true to his authentic self. Gregarious by nature, Robert was quick to strike up a conversation and loved a good debate. He was a voracious reader and enjoyed a good game of chess. He had a wonderful sense of humor, delighted in dancing with Eleanor, “pumping iron” at the gym, or baking for his family. He treasured every moment and took the opportunity to document precious memories. He was often found behind the camera at family events, wrote thoughtful notes, and journaled his many adventures. After his retirement, he traveled throughout the country with his wife, spending time in Florida, the west coast, and visiting their children. Robert will be dearly missed by his family and those who knew him.

Visiting hours will be held on Tuesday, May 31st from 9am-10am at the Phaneuf Funeral Home & Crematorium, 243 Hanover Street in Manchester. A funeral service will follow at 10am in the funeral home. Interment in the New Hampshire State Veteran Cemetery, Boscawen at 12pm. Family and friends are kindly invited to attend.

In lieu flowers, donations in Robert’s memory may be made to The Wounded Warriors Project or Amedisys Home Healthcare, 8 Commerce Drive, Suite 101, Bedford, NH 03110.

To order memorial trees or send flowers to the family in memory of Robert G. Halliday, please visit our flower store.