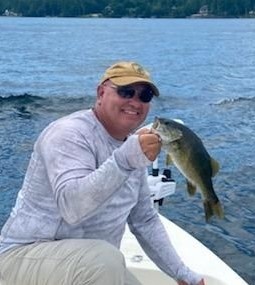 Ronald James Ashburn, 53, passed away on December 29, 2021 due to heart complications from COVID.

Ron was born February 28, 1968 in Omaha Nebraska son of Mary (Main) Ashburn-Phillips and the late Roy Robert Ashburn, Jr. and was married to Sharon (Hamill-Dow) Ashburn.

Ron, a beloved husband, father, stepfather, grandfather, son, brother, and uncle, served in the Navy during the Persian Gulf War and was stationed on the Vincennes CG-49, an Aegis Class Guided Missile Cruiser where he met many of his lifelong friends. While in San Diego, Ron went through the Police Academy and served as a San Diego Sheriff’s Deputy. Ron joined the Army Reserves and went Active Duty in the Army in 2009. He served honorably until his death achieving the rank of Master Sergeant.

Ron was truly a jack of all trades, and an expert at everything he did! He owned a cable company and was a mechanic. Ron enjoyed renovating his homes with his wife, Sharon, and caring for all of their dogs, cats, chickens and pigs. His children were very important to him, and he followed in his father’s footsteps by coaching their sports through their high school years. Ron had passions for animals, scuba diving, and most of all, fishing on his boat. He also enjoyed golfing and playing billiards.

Ron was a kind and helpful man, who captivated everyone he met with his warm smile and his trademark dimples. If people were laughing, it was surely because of Ron’s sense of humor which he definitely passed down to his children. Ron loved greatly, was loved greatly, and will be greatly missed.

To order memorial trees or send flowers to the family in memory of Ronald James Ashburn, please visit our flower store.
Send a Sympathy Card