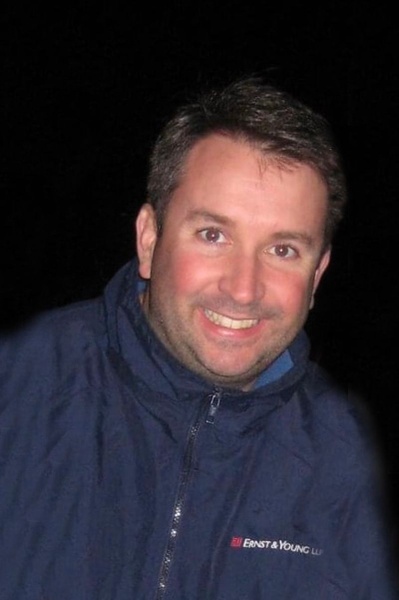 Stephen David Kraus, 49, of Bedford, NH and formerly of Medfield, MA, passed away suddenly at his home on March 18, 2021. Born in Norwood, MA on May 17, 1971, he was a son of David and Anne (Feeney) Kraus. He shared 22 years of marriage with his wife, Maryellen (Hughes) Kraus, with whom he had two children, Molly and Sean Kraus.

Stephen was raised in Medfield, MA and was a graduate of Xaverian Brothers High School and College of the Holy Cross. He began his career as a CPA and later transitioned to marketing, working as the Vice President of Marketing for Cogito Corp and more recently as the Head of Marketing at Hi Marley.

Stephen was happiest cheering Molly and Sean on from the sidelines or stands, showing them his newest "toy" or latest Amazon purchase, or bringing excitement to an ordinary day. His enthusiasm and unique sense of humor brought light to the people who were blessed to be in his life.

In addition to his wife and children, Stephen is survived by his mother, Anne Kraus of Medfield, MA; his sister, Jeanne Ernst and her husband Scott of Amherst, NY; his brother, David Kraus and his wife Sonja of Amherst, NH; his brother John Kraus of Medfield, MA; his mother- and father in-law, Leo and Elaine Hughes of Milford, MA; and his sister-in-law Stacey Shea and her husband Christopher of Southborough, MA; as well as his nieces, nephews, extended family members, and dear friends. He was predeceased by his father, David Kraus.

In lieu of flowers, donations in Stephen's memory may be made to the American Heart Association.
To order memorial trees or send flowers to the family in memory of Stephen David Kraus, please visit our flower store.
Send a Sympathy Card