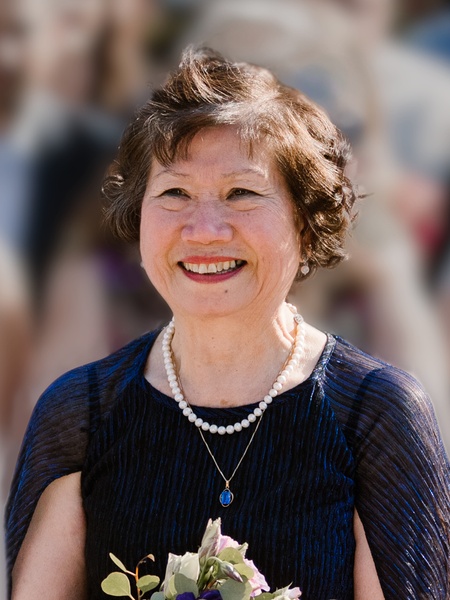 Ut Thi Rossignol, 69, of Manchester, New Hampshire, passed away April 18, 2022. She was a proud woman, strong mother and loving ba noi (Vietnamese for grandmother), and lived a very meaningful life that intersected with history on many occasions.

Ms. Rossignol was born on July 19, 1952, in Saigon, Vietnam, to Thi Dang Vo (mother) and Van Thang Vo (father), and was the middle of seven children, which included three brothers and three sisters. From a young age, she learned her amazing cooking skills from her mom, who owned a small street-side restaurant in Saigon that served soups, rice and noodle dishes, meats and seafoods for neighborhood families and passersby. Her father operated a horse-drawn transportation service and would bring his children to school when possible. However, on one fateful day in June 1963, she walked to school amidst much commotion. As she passed the Presidential Palace in Saigon, she witnessed the self-immolation of Thich Quang Duc, also known as the Burning Monk. Though she did not often speak of this event, it clearly left an impression on her about what freedom meant.

The U.S. military presence in Vietnam would continue to increase as the years passed after that historic event. In 1967, Ms. Rossignol started working for laundry services at the Dong Tam Base Camp, home to the famed 9th Infantry Division. She personally received and processed for cleaning the uniform of General William Westmoreland, who would soon go on to be the Chief of Staff of the U.S. Army. She would continue to work for the U.S. military at other locations, including Quan Loi Base Camp, where she spoke glowingly of the soldiers in the 1st Cavalry Division and the 11th Armored Cavalry Regiment, who would send her back home with food, toys and medication for her family.

Working with the U.S. military was not without risks. Ms. Rossignol recalled being scolded by her mother for traveling to the Cu Chi Base Camp, which was about 15 miles away from the Cu Chi Tunnels, the base of operations for North Vietnam's Tet Offensive. Sadly, she described losing friends and acquaintances to bombings by the Viet Cong. These bombings targeted the areas and people supporting the American military. But the ability to provide financial support to her family far outweighed these concerns.

For Ms. Rossignol, the war hit home hard when her closest brother, who was serving in a South Vietnamese armored tank division, was killed by the North Vietnamese Army in April 1974. Just two months later, she would give birth to her first child, Derek. Ms. Rossignol's mother prophetically insisted that there was no future for her and her newborn in the war-torn country. The decision to leave her family, customs and country did not come easily, but she sacrificed the life she knew in pursuit of the American Dream.

The opportunity to leave Vietnam came in 1975, four days prior to the fall of Saigon as a part of Operation New Life. On that day, Ms. Rossignol described life as normal for the city she would soon leave behind. After waiting nearly 24 hours without food and water in the field at Tan Son Nhut Air Base in Saigon, Ms. Rossignol, her son and her then-husband boarded a military plane (C-141 Starlifter) outfitted with thick cargo straps for seats, which was bound to Clark Air Base in the Philippines. She recalled trying to sleep on cots in a very noisy gymnasium. The young family would then fly to Andersen Air Base in Guam where they stayed in a refugee tent city for further processing. They stopped at Camp Pendleton in southern California for one evening before arriving in Manchester, New Hampshire.

After sleeping for nearly 24 hours in her new home, Ms. Rossignol awoke to television news clips of tanks crashing through the Presidential Palace; Saigon had fallen to the Communist regime. Her concern immediately went to the family she had left behind. Years went by without Ms. Rossignol contacting her family in Vietnam out of fear for their safety. One morning in 1981, Ms. Rossignol received a phone call from her oldest brother who had escaped to Australia, a story that was published in the Manchester Union Leader newspaper on September 27, 1981. Connected through the International Red Cross, it was the first confirmation of her family's wellbeing since arriving in the U.S. About a year and a half later, Ms. Rossignol's second son, Jason, was born. She would later travel back to Vietnam in 1988, and coincidently, sat next to Surgeon General C. Everett Koop, whom she described as "polite" and "chatty."

Ms. Rossignol never stopped pursuing a better future for her family in the U.S. and in Vietnam. Her daily phone calls to General Electric in Hooksett would pay off after months of trying: She was hired for the tubing department, which produced components necessary for military jet engines for the F-18 Hornet and the F-117 Nighthawk stealth fighter. On February 12, 1992, she met President George H.W. Bush, who was touring the factory, and she had the honor of shaking his hand and receiving his autograph.

Serving her family was always of paramount importance for Ms. Rossignol. She worked tirelessly to provide financial support for her family in Vietnam and ultimately sponsored two of her sisters, a brother-in-law and a niece for U.S. citizenship. She would later go on to build a house in Saigon for the family she left behind, then she built a home in New Hampshire for herself and her two sons. Ms. Rossignol cherished the opportunities to watch Derek play golf and hockey growing up, and to host Jason's high school football team for spaghetti dinners before big games. She firmly believed in education as a means to success, and she was so proud to support both Derek and Jason through college. Her hard work, dedication, and love for her family and this country exemplified the American Dream.

In her spare time and in retirement, Ms. Rossignol enjoyed gardening and her beloved New England sports teams. She was ecstatic to see David Ortiz hit a walk-off homerun from the stands during her first Red Sox game and to watch six Patriot Super Bowls. Ms. Rossignol was overjoyed to be a ba noi and spent many loving hours looking at pictures and videos of her grandson, and using FaceTime to watch him grow.

Ms. Rossignol is survived by her two sons, Derek Sullivan and his wife Kaitlin of Manchester, and Jason Brown and his wife Meghann of Albuquerque, New Mexico; her grandson Carter Edward Brown; two brothers and a sister; and several nieces, nephews and cousins.

In closing, an except from the 1981 Manchester Union Leader newspaper article summarizes Ms. Rossignol's resolve and determination in pursuit of the American Dream.

Family and freedom are the two things Ut Thi most prizes, and knows their value more than most Americans who have always had both. "People should appreciate what they have more; they have everything here." She acknowledges the hard times in life, "but I think of tomorrow and the future and my son. I have to be strong, and I tell myself, 'It's been worse than this before.'"

A memorial gathering will take place at Phaneuf Funeral Homes & Crematorium, 243 Hanover Street, Manchester, on Tuesday, July 19, 2022, which would have been Ms. Rossignol's 70th birthday, with visiting from 4PM to 5PM, and a memorial service to follow from 5PM to 6PM. In lieu of flowers, donations may be made to St. Jude's Children's Research Hospital. To view an online tribute, send condolences to the family or for more information, visit www.phaneuf.net.

To order memorial trees or send flowers to the family in memory of Ut Thi Rossignol, please visit our flower store.