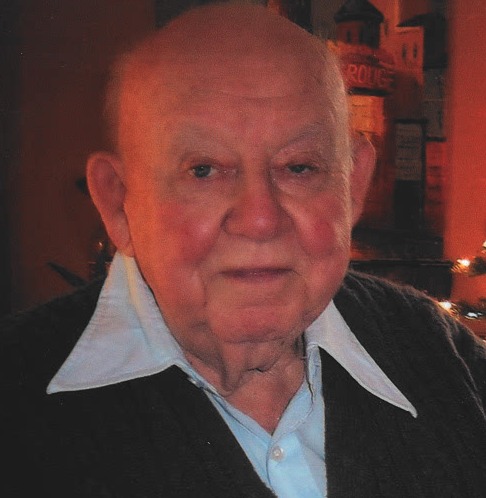 Walter S. Gorski, 97, of Manchester, NH died on Saturday, May 7, 2022 at Villa Crest Nursing & Retirement Community, in Manchester, NH.
Mr. Gorski was born on July 22, 1924, in Manchester, NH, the son of the late Leon and Julia (Wszolek) Gorski. He was a lifelong resident of Manchester, NH.
He enlisted in the Marine Corps and served as a sergeant, becoming an expert rifleman. He was stationed in the Pacific Theatre. Later, he served in the Korean conflict.
Walter worked as a fireman for Manchester, (Engine 10) for approximately ten years, then moved on to the trucking industry where he retired from Mutrie/Coastal. He was a proud member of the teamsters. Upon retirement, he worked part time at the Manchester Airport and the Union Leader Corp. as a security guard and loved every minute of it!
He was a member of St. Joseph Holy Men’s Society, Catholic War Veterans, #1341 and for many years was a parishioner of St. Hedwig’s Church where he was a choir member. He loved Polka music, attending many dances at the Pulaski Club.
He enjoyed watching the Red Sox, recycling for the environment, and scratching lottery tickets. One of his favorite past times was sharing his knowledge about the history of Manchester in the “moonshine” days and the Depression Era.
Members of his family include; his beloved wife of 67 years, Veronica (Kucharek) Gorski of Manchester, NH; three sons, Alexander Gorski of Manchester, NH; Andrew Gorski and his wife Jill of Derry, NH; Christopher Gorski and his wife Josee, grandsons Jacob Gorski and Luke Gorski of Weare, NH; a daughter, Theresa “Tessie” Perry and her husband, Mark of Manchester, NH; several nieces, nephews and cousins. Mr. Gorski was predeceased by four brothers and a sister.
The family would like to thank Easterseals, Granite VNA and Villa Crest Nursing Home for their outstanding love and care for Walter.
SERVICES: There are no calling hours. A memorial service will be held on Friday, May 13, 2022, 10 AM at St Hedwig Church, 147 Walnut Street in Manchester. Committal prayers will follow at St. Hedwig Cemetery, in Bedford, NH.
In lieu of flowers, donations can be made to: Easterseals Military and Veterans Program - NH, 555 Auburn Street, Manchester, NH  03103, in memory of Mr. Walter Gorski.
Phaneuf Funeral Homes and Crematorium assisted the family with arrangements. To view an online memorial, leave a message of condolence, or for more information please go to www.phaneuf.net

To order memorial trees or send flowers to the family in memory of Walter S. Gorski, please visit our flower store.