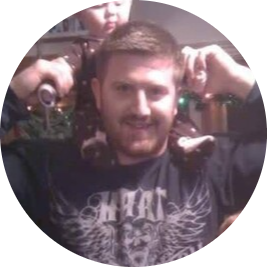 Wayne Brandon Thompson, 36, died Tuesday, July 19, 2022, at Catholic Medical Center, in Manchester, NH. Wayne was born on September 16, 1985, in Lowell, MA. Wayne was the son Tammy D. Ellis and the late George S. Thompson. Wayne moved to Derry, NH in 1999. He was a graduate of Pinkerton Academy.

While at Pinkerton Academy, he worked with Phillip ‘Phil’ Dupere of Delta Well, in Derry, NH. Phil provided mentorship, love & encouragement, to bolster Wayne’s skills and confidence. Together they expanded Wayne’s knowledge of home construction, brick laying, painting, roofing & more. Wayne went on to expand his skills by working with multiple local companies doing landscape, construction, paving and other odd jobs. His need for freedom resulted in him creating & implementing one of his many small business ideas, Granite State Solutions, of Derry, NH. Wayne ultimately sold his business, and moved to Warner, NH, with Ashley Ross, with whom he shared two children, Brandon Xavier Ross-Thompson and Lilyana Victoria Thompson. They were his greatest joy. He was proud of Brandon’s academic achievements and football career and Lilyana will always be “Daddy’s Princess.”

Wayne is survived by his son, Brandon Xavier Ross-Thompson & his daughter, Lilyana Victoria Thompson, and their mother Ashley Ross, of Warner NH; his biological mother, Tammy Ellis of Saco, ME; his “mother by heart” Deborah Stripling and her husband Michael Stripling of Derry, NH, his six siblings; Heather Brown of Derry, NH, Waylon Brown of Gloucester, MA, Brieanna Thompson of Goffstown, NH, Frederick ‘Freddy’ Salmons of Derry, NH, Amy Famiglietti & her wife, Arianna, of Port Orange, FL, and Christopher Salmons of Derry, NH, along with his close cousin, Crystal Ellis of Lowell, MA.

Wayne also leaves behind many aunts, uncles, nieces, nephews, and close friends that he considered family.

SERVICES: Visitation will be 4pm - 7pm on Wednesday, August 3rd, 2022 at Phaneuf Funeral Home at 243 Hanover St. in Manchester,NH.  Family and friends are invited to attend.

Come to say farewell to Wayne, and leave a message of love for his family.

Cremation will follow. A private family burial held at convenience of the family. Wayne’s final resting place will be on ‘Freedom Avenue’ at Forest Hill Cemetery, in East Derry, NH, near his home. Those who wish to assist the family may donate to the go fund me account created to help with the costs of laying Wayne to rest.  https://gofund.me/ee0621f6  All donations truly appreciated. Sincerest thanks & Blessings.

To order memorial trees or send flowers to the family in memory of Wayne Thompson, please visit our flower store.