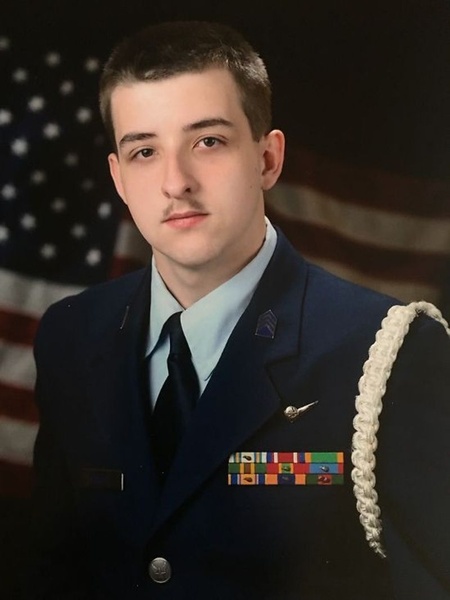 Wyatt graduated from Pinkerton Academy and The P.A.C.E program in 2018. During his time at Pinkerton he was a member of the AFJRROTC Program for four years. During this time he earned the Airman of the year award in two of those years. He also participated in their leadership school with the national guard and earned the spirit award. Wyatt excelled in ROTC. He truly loved it, took in extremely serious and expected other members to also.

When Wyatt graduated, as he was walking to get his diploma, he was introduced as " probably the only student in their history to have never broken a rule in his time there"

While Wyatt was still in school he obtained a job at Moe Joes in Manchester, NH. He never missed a day of work or classes during that time and became very well liked by his co workers and he felt the same about them.

Shortly after graduation, Wyatt took a new job at Faulkner's in Hooksett, NH where he was still employed. Wyatt loved what he did at Faulkner's no matter the season. He loved every plant, every flower, every tree and even the snow. Some of his friends and coworkers would probably tell you he even loved the little insects or creatures that might land on any of them. He would rescue them and assure they got to a safe place.

Wyatt had the ability to see the world differently than most of us. He truly believed everything (creature, plant, person etc.) deserved to be cared about and he cared about each and everything.

He once "rescued" a tree from work at Faulkner's because unlike anyone else, he " believed in it." We don't believe anyone else would have. He brought it home, planted it, watered it, fed it, talked to it and checked on it diligently. The next Spring it bloomed beautifully!! Somehow he knew it would.

Wyatt believed the world should care about the beauty and meaningfulness of all of those same things. Everything has potential and a soul just like people.

He loved "exploring" and collecting a rock, a shell, or even a random leaf along the way. He had a diving mask and would dive to the bottom of a river or lake to see what treasures he could find. He enjoyed the tide change at the ocean because each time the tide changed it brought new and different " history" and he cared what the tide and water had to say.

Wyatt loved those important to him deeply. He chose the words, "I love you" very selectively and if he said them he meant them with everything in him. Wyatt would also show his love purposefully by " presenting" you with a snack or a meal that was either his favorite or yours. If he offered you one of his favorites he REALLY loved you. He enjoyed cooking burgers on the grill and he especially loved "DW's" because in his words " no one cooked them as properly or as well." He was well known for utilizing a food delivery service and his chicken nuggets and Mcflurries or his chicken bbq pizza both his fast food favorite's. If he ever shared either of those with you again he must have REALLY loved you.

Wyatt was a video game " Master". As much as he enjoyed them or as seriously as he took it, he didn't mind teaching someone or helping them get better at one. He enjoyed when people were interested in his knowledge of things.

Wyatt was well known for wearing shorts year round because he found them comfortable. he wasn't interested in anyone's arguments of why he shouldn't. He had many pairs of shoes for many purposes, but even on the snowiest of days if he would be barefoot in sandals or in slippers every time.
Wyatt always wanted to help everyone. If someone needed help with anything from the smallest to the largest he would be the first to offer or to say yes if asked.

Wyatt was the most intelligent, kindest, respectful and honest person you could ever meet. Anyone lucky enough to have met him would say the same thing. Everyone loved him. Wyatt's sense of humor was amazing and he had a way of taking people off guard in his unique way in which he thought. What he would describe as a pun was sometimes a humorous analogy or play on words. He loved to make people laugh and to see them happy it broke his heart to see someone hurting or sad.

Wyatt loved America deeply; the flag, the anthem, the people that served/serve our country and all of its meaning and everything that goes with it. He believed others should as well. He took great pride in hanging the flag whether at home or elsewhere and ensured it was done properly and respectfully.

Wyatt would be heartbroken to know how much we are hurting.

Because of who he was and how he thought we believe, the following well known ode is appropriate.

Wyatt was preceded in death by his paternal Grandparents, James and Josephine Grindle and his step grandfather, Charlie Howard.

Wyatt is survived by His mother Maile Howard ( Stoddard) and step father Dan Howard ( who he lovingly called DW) of Manchester, NH, siblings, Shawna Marsh of NH, Joshua Stoddard of MA, Briana Arnold, Dylan Arnold and Morgan Arnold all of Vermont as well as a step sister Ashley Howard of NH; Maternal grandparents Mel & Jadie Stoddard of Vermont and step grandmother Judy Howard of Florida; paternal uncles, Kurtis and his wife Carissa of Maine and Kevin Marsh of NH as well as his maternal uncles Terry Stoddard and Trace Stoddard of Vermont. He is also survived by his father Kendal Marsh as well as nephews and cousins.

SERVICES: A Celebration of Life is to be held at a later date to be determined by the family. Please continue to CHECK BACK HERE FOR ACCURATE AND CORRECT INFORMATION REGARDING A DATE PLACE AND TIME.

For those wishing to honor Wyatt, please consider making a donation in Wyatt's full name to The AFJRROTC Program at Pinkerton Academy, 5 Pinkerton St., Derry, NH 03038.
To order memorial trees or send flowers to the family in memory of Wyatt Marsh, please visit our flower store.